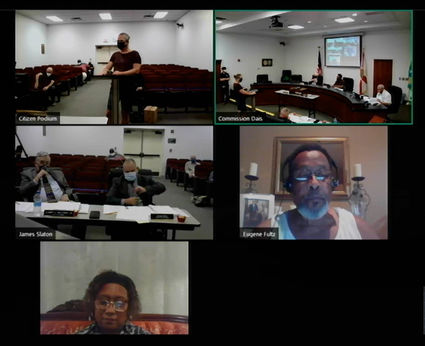 Lake Wales City commissioners by a 4-1 vote Sept. 9 approved an invocation policy that appoints an official chaplain and develops a list of volunteers from local congregations to fill in as needed.

Two atheists who live outside the city and one city resident who described herself as non-religious failed to convince commissioners to abandon the invocations or replace them with a moment of silence.

Lake Wales resident Charlene Bennett said the policy "pretty much guarantees you violate the First Amendment" since she said most prayers will be by "fundamentalist Christians." She said commissioners would be disrespecting the estimated 40 percent of citizens who are non-religious. She called the invocation policy "offensive and scary to people like me," noting most non-religious citizens wouldn't speak up for fear of "ostracism and retribution."

Sarah Ray with the Atheist Community of Polk County, who sparked the move for an official policy by volunteering to give the invocation at the Aug. 4 commission meeting, again pressed for a moment of silence instead of an invocation, sharing her personal experiences coming from a small town and being "marginalized" as a transgender atheist.

"When people fear you unjustly they can justify doing horrible things to you," Ray said.

City Commissioner Curtis Gibson said the commissioners were just continuing past practice by appointing Dr. James Moyer as the city's chaplain; Moyer has been giving the invocation before city meetings for more than 11 years. Creating the list of volunteer clergy members with congregations in the four Lake Wales area zip codes to give the invocation in Moyer's absence was recommended by City Attorney Chuck Galloway as the most legally defensible process.

"Our city attorney has stated that he feels confident in the resolution that he proposed to make sure we are following the law. I don't believe we're excluding anybody from wanting to do an invocation," Gibson said. "We are elected to do what we do. We get put in tough positions where we have to make tough decisions. We've been doing this for quite some time and never had any issues."

City Commissioner Al Goldstein shared the diversity of his own family and his personal journey, from his bar mitzvah into the Jewish faith to accepting Jesus Christ and finding "the love of God" during his service in the U.S. Marines in the 1960s and 1970s. He said he understood expressed concerns but didn't want to "destroy history and religion."

"I believe in God and no matter how I vote tonight it's not going to take that away from me," Goldstein said, reluctantly voting for the policy. "We have so many things tearing our community apart, we don't need anything else that will tear us apart; I'm afraid this will do it."

Deputy Mayor Robin Gibson cast the lone vote against the policy, citing the important constitutional separation of church and state. He advocated for the moment of silence where "Everybody is free to pray to their God; that makes the most sense to me out of fairness. There are so many persons of one religion who are not necessarily in favor of religion as a whole, they are against somebody who has another different religion."

Joseph Richardson from the Orlando area said he was speaking for those who couldn't speak for themselves. He said as an atheist "I was one of those people who when I realized I couldn't believe anymore, surrounded by Christian family and friends – it was a terrifying moment for me."

Richardson said commissioners were sending a signal that some people were not wanted and the policy would drive them underground and make them afraid to be themselves.

"Don't do it. Don't be exclusionary. Instead be leaders, be leaders with the guts to do what's right. Embrace every single person in this city. Show that you care about every constituent," Richardson urged.

Virgil Ullom, a retired dentist from Babson Park who frequently addresses the commission on matters of faith, supported the new policy: – "I think we need to keep the invocation, the special time to honor the one who created us, the one who died for us and the one who asks us to love one another."

With the approval of the policy City Clerk Jennifer Nanek will send out letters to identified religious leaders with congregations in the area, giving them the opportunity to volunteer to be on the list to give invocations. When Moyer notifies her he is unavailable for a particular meeting Nanek will call for a substitute from the list on a first come basis.