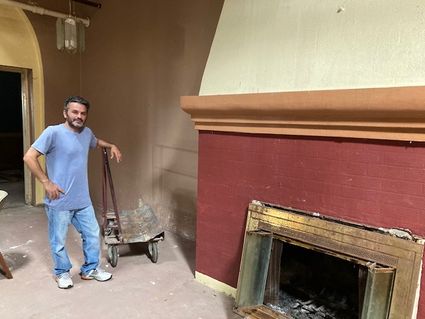 Henry Kebabjian wants to redevelop the historic Seminole Hotel in downtown Lake Wales, but his timing may be a little off.

Kebabjian bought the three-story hotel Aug. 19 at a bargain-basement price of $10,500, two months after the city's Code Enforcement Board voted to foreclose on the property. The city in 2017 declared the building unsafe, emptied it of tenants and condemned it for multiple code violations.

Recent owner Cardiff Howell of Orlando was unable to submit an acceptable renovation plan, and attempts by local developer Ray Brown to purchase the property fell through in June.

In its attempts to get the property brought up to code, the code board levied fines of $250 per day and the liens against the property now exceed $265,000. Close to $6,000 more is owed for an environmental study to determine the asbestos content of the building. At one point the city planned to demolish the structure, but that plan was shelved when the only bid came in at $700,000.

Kebabjian says he has the money and should be allowed to restore the hotel. He recently sold a downtown condo and Giorgio's Restaurant for $240,000, which was $170,000 more than the $70,000 purchase price he negotiated in early 2017 for the bank-owned distressed property. He also obtained a letter from Boyd Management in Winter Park, pre-qualifying him for a $350,000 construction and rehab loan for the Seminole project. Kebabjian estimates the Seminole restoration would cost about $400,000, less than half what was estimated by Brown and his investment partner Rick Gonzalez, a noted South Florida architect with extensive experience renovating historic buildings.

Kebabjian wants the city to stop the foreclosure and waive the liens. He said he plans to spend about $80,000 to refurbish the building's exterior, including installation of new windows throughout the building. Then he wants to renovate the first floor, creating four retail spaces, a restaurant and possibly a wine and cigar bar. Once he starts generating income from the first floor tenants Kebabjian planned to create apartments or hotel rooms on the second floor, followed by more on the third floor.

Interim City Manager James Slaton said Kebabjian contacted him after the purchase but, "By the time I found out about it the foreclosure paperwork had already been filed.

"My whole deal is we're finally getting somewhere. I'm not going to try to stop it in the 11th hour. The ship has sailed," Slaton said.

Deputy Mayor Robin Gibson, who chairs the city's Community Redevelopment Agency (CRA), said, "I have no difficulty enforcing the law. If we have our fines and everything paid and the law is complied with the hotel stays owned the way it is."

Both Gibson and Slaton said once the city's foreclosure is complete they would like to see the hotel ownership transferred to the CRA, which has more flexibility in working with private investors to redevelop the property. Concerns were raised about Kebabjian's track record, which according to public records include seven short-lived corporations since 2010 that are now inactive and multiple liens filed against him by the association of Bullard building owners, where he had the restaurant and condo. (Gibson was one of the owners.) Kebabjian said he has been a successful investor and licensed homebuilder in New Jersey.

When Brown and Gonzalez were pursuing purchase of the Seminole, Gonzalez said the hotel was structurally sound and well worth restoring. A revamped hotel is featured in the city's Lake Wales Connected downtown redevelopment plan, since it lies at 207 N. 1st Street, two blocks north of the historic Walesbilt Hotel and on the main road linking downtown to the city's northwest business district.

Kebabjian said he would like to meet with city officials to lay out a development plan with specific timelines in exchange for them possibly waiving the liens.

"Nobody's going to benefit with the city foreclosing on it," Kebabjian said, noting liens have been waived for other people in the past. "What's the purpose of trying to collect the lien? They could easily withdraw the foreclosure."

But Slaton said during his due diligence as he considered purchasing the property Kebabjian should have become aware of the building's issues: "He bought the building after it was being foreclosed, willingly with a long list of code compliance violations and a foreclosure order. How are we the bad guys because we aren't stopping at the 11th hour after it's all been done?"

Learn from your past mistakes. Make the guy put up a bond for the $265K and reduce the bond as certain progress deadlines are met.

The liens served a purpose, they forced the owner to sell. It would seem to me that waiving them would be beneficial to all concerned; however, I think the city needs to tie any waivers to actual progress.