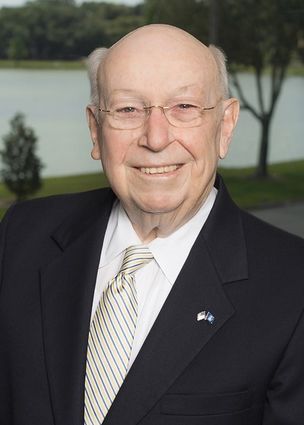 Monterey, known as either "Monte" or "Buddy," was born in Bartow on Nov. 30, 1930. He received his Bachelor of Arts and Bachelor of Law degrees from the University of Florida in 1952 and 1954, respectively. He then served as an officer on active duty in the U.S. Air Force from 1954 to 1956. From 1956 to 1980, Monte practiced law in a small multi-member law firm that engaged in general practice.

In addition to Monte's private practice as a partner in his law firm, from 1959 to 1977 he was a special part-time prosecuting attorney for Polk County. The last six of those years he served as chief assistant state attorney and was charged with the responsibility of advising the grand jury and trying major cases. From 1969 to 1980, he was general counsel to the Florida Citrus Commission. He also served several successive terms as chairman of The Florida Bar's 10th Judicial Circuit Grievance Committee.

During his tenure on the Court, he served on The Florida Bar's Judicial Administration Selection and Tenure Committee as chair, the Judicial Nominating Procedures Committee, the Appellate Rules Committee and the Florida Supreme Court's Advisory Committee on Local Rules as chair. After serving as an active judge on the Court for over 20 years, he returned to practice law at Gray Robinson Law Firm in Lakeland. He was involved in trial and appellate matters before all levels of state and federal courts.

He was a member of the H. Lee Moffitt Cancer Center Foundation and a prior member of the Board of Directors of Alico Inc. He served on the Ben Hill Griffin, Inc. Board of Directors. He was a lifelong member of the Associate Reformed Presbyterian Church of Bartow, where he taught Sunday School for over 50 years and served as an Elder and then Elder Emeritis. He also was the past Moderator of the General Synod of the Associate Reformed Presbyterian Church.

Family will receive friends from 9 a.m. until 10 a.m. funeral service time on Tuesday, Oct. 6 at the Associate Reformed Presbyterian Church of Bartow. Interment will be held at Wildwood Cemetery in Bartow.

Contributions may be made to the Associate Reformed Presbyterian Church of Bartow or Moffitt Cancer Center. Condolences to family at http://www.whiddenmcleanfuneralhome.com