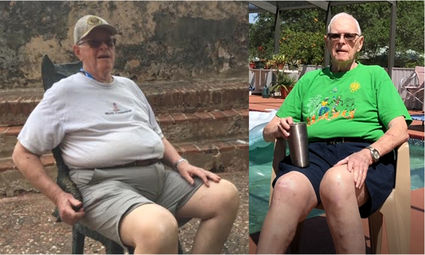 John Clifford before and after 100-pound weight loss

John Clifford is Florida King, but the pandemic postponed his official coronation.

The 83-year-old Lake Wales man lost more than 100 pounds through the international Take Off Pounds Sensibly program, making him the 2020 reigning king of Florida.

"I'm a king in name only but someday I may have a court," said Clifford, noting he has been able to keep within a few pounds of his goal weight of 185.

Clifford joined TOPS 15 years ago while living in Connecticut. He and wife Barbara, who also has lost more than 100 pounds through the TOPS program, moved to Florida 10 years ago and joined the group that meets at Tower Lakes.

Clifford was motivated by a photo taken on a cruise: "I looked at the picture and said 'man you're a fat slob. We really have to do something about his.' "

TOPS groups normally meet weekly for confidential weigh-ins and motivation. Members announce at the end of the meeting whether they have gained or lost. Clifford says if someone has lost weight, the members applaud and if they gained, members say "come back next week."

"It's a support group," said Clifford. "You can call someone if you really feel like you want to eat that candy bar or bag of chips – there's nothing that says you cannot do it except your own constitution."

TOPS doesn't sell food, but its members share recipes and offer programs on different foods other members might like to try. The organization's website at https://www.tops.org/ also includes recipes and other weight loss resources. Membership dues are $32 a year to the international organization, plus about $5 per month to the local chapter.

Clifford said he misses the weekly meetings shut down by the COVID-19 pandemic, but eating out less and going to a mostly vegetarian diet, portion control, and exercise have helped the couple maintain their weight loss. He said he also drinks at least six glasses of water each day to flush out his system.

While the Tower Lakes TOPS group has been unable to meet due to the pandemic, Clifford said members have kept in touch and some are delivering fresh vegetables from area food banks to members and others in need.

"It's a really great organization," Clifford said. "I have really enjoyed my years in it. It's full of really nice people."

The TOPS organization has 205 chapters in Florida, and in 2019 its members lost a total of 21,114 pounds. TOPS notes that nearly 31 percent of Florida's residents are obese, which is a risk factor for the COVID-19 virus.

Obesity can cause an array of medical conditions including heart disease, stroke, type 2 diabetes and certain types of cancer.