New Liaison Officer is Driven by Heart, Commitment to Community 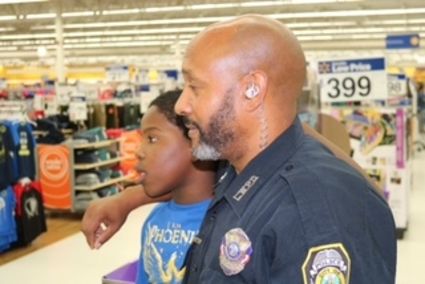 Ed Palmer participates in LWPD Shop with a Cop program

But if you ask James "Perly" Sermons, it's been Palmer's calling for a lifetime – Sermons' lifetime.

The two first met when Palmer served as the School Resource Officer at Hillcrest Elementary when Perly was a student there. As luck might have it – others might call in Divine guidance – Palmer followed Sermons as an SRO when the youngster went to Roosevelt Academy and to Lake Wales High School.

"As long as I've known him, I've never heard bad about him," Sermons said. Now 31, he's proprietor of his own mobile vehicle detailing business. "I was a terrible kid. He can talk to anybody. He can make you change your mind. People told me I'd never be anything, but he always said I could be anything I wanted to be. He kept me going when people told me I couldn't."

Palmer is no stranger to many in Lake Wales, having quite literally walked the beat in the city for many years, often alongside Lt. David Black, a close friend and confidant.

A native of Jamaica, Palmer and his family moved to Connecticut when he was 13. He spent five years on the police force in Middleton, Conn., before relocating to the Ridge in the mid 1990s to be closer to his parents, and the parents of his wife, Darlene.

Working security at Lake Wales Hospital, a chance conversation with a Lake Wales police captain, the late Earnest Stoudemire, convinced him to apply for a position with the city's force.

Throughout his career, and often without even the knowledge of his friends and co-workers, Palmer was already doing his own personal police outreach.

He founded the Homework Club to help in-need students who lived in the Garden Apartments on Domaris Avenue, did volunteer work at Polk Avenue Elementary School and annually dipped into his own pocket to purchase five to 10 bicycles a year for youngsters at Spook Hill Elementary. This past winter he spearheaded the renovation of the Eagle's Landing game room at Roosevelt Academy, and actually started a non-profit – Guardian Riders Association Caring and Empowering – to continue his charitable crusade.

Because of his relationship with the Lake Wales Walmart through the annual holiday "Shop with the Cop" program, the local box store donated thousands of dollars along with thousands more in merchandise to make the game room renovation complete.

"He did that all on his own time," Black noted. "He brought a lot of people together to make all of this happen. It's just the way he lives his life."

"My heart is what drives me," he said simply. "I'm going to do what's right. That's what I bank on. That's the circle I live in."

He also said that there are no magic solutions for a better community police relationship. His current efforts are based in being visible, listening and faith.

"It's still a work in progress, but really it's just talking to people," he said. "My philosophy is it's not about what's happening in Frostproof, but what happens in the City of Lake Wales. If you drop one drop in the middle of a lake, it's going to create a ripple. That's what I'm hoping for in helping people, to have it spread." 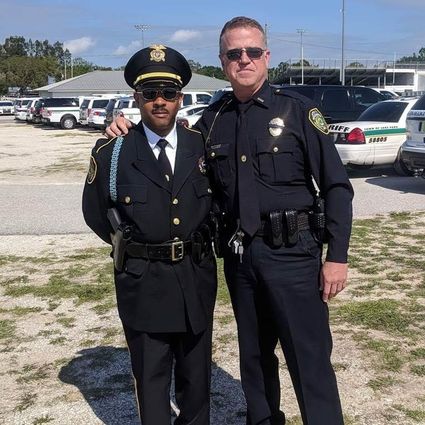 Naming an official community liaison officer is one of many recent initiatives the local police department has undertaken to foster a stronger relationship with residents and business people. Recent months have seen the reactivation of the Lake Wales Citizens and Police Community Relations Advisory Committee, and the debut of a "Rallying Point" outreach program at community locations and events throughout the city.

"It's been a real positive so far," he said about his new position. "Unbeknownst to me, I've kind of had an air about me. Most people have said, 'you are perfect' for that job."

Although it's been only a few weeks in his new position, the reality is his community outreach efforts have been going on for decades, at least if Palmer had anything to say about it.

Most importantly, during all that time, there have been tangible results.

"Not too many people would talk to me," Sermons added. "He just stayed with me. I don't know what it was, but I looked at his badge like he was a father figure to me."