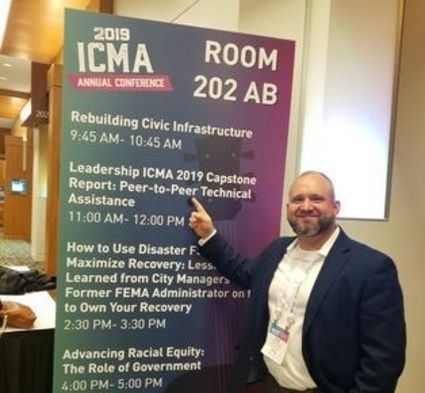 The Lake Wales City Commission on Nov. 17 formalized its selection of James Slaton as city manager by approving his employment contract.

The Commission voted unanimously Oct. 20 to offer the interim city manager the full-time position. Slaton has been a city employee for 17 years, including recent service as the deputy city manager in charge of nine departments and overseeing multiple special projects. Slaton also has completed an intensive two-year city manager training program offered by the International City Managers Association.

As part of his proposed employment contract, Slaton requested an annual compensation package that is about $6,015 less than what was paid to former City Manager Ken Fields, who took early retirement in June. Slaton is asking for a smaller retirement contribution to offset a higher base salary of $155,000 – more in line with other managers of similar sized cities. Auburndale pays its city manager $155,844, while the Bartow city manager's salary is $166,277.

Due to his advanced age – 72 when he left the city - and a stated interest in boosting his retirement account, Fields chose to freeze his salary at a lower rate of $139,000, in exchange for a city contribution of $55,000 into his 401(a) retirement plan.

At age 43, Slaton is already vested in the city pension plan, so he is requesting a more market competitive salary and a smaller contribution of $19,500 to a deferred compensation plan. Slaton would be eligible for any cost of living adjustment given other employees, but any raises or bonuses would be up to the city commission based upon his annual performance review.

Slaton would continue accruing the same sick leave and vacation offered other city employees. He also requested the same $400 monthly car allowance Fields received for driving his personal vehicle and the same $100 monthly electronic allowance to offset the cost of using his personal cell phone, home computer and internet for city business.

The proposed contract would require Slaton, who currently lives in South Lakeland, to move to the "greater Lake Wales area" within 12 months. Commissioners at their Nov. 11 workshop discussed the lack of executive housing within the city, agreeing Slaton might need extra time to locate or build a new home and an expanded boundary – possibly up to 10 miles outside the city limits. Slaton said he wants to move to the area as soon as possible and hopes to have a Lake Wales address.

Commissioners praised Slaton for his performance since he became interim city manager June 2, and expressed confidence that he is the right choice to move the city forward.

Past city manager contracts have been multi-year and often were extended further out in conjunction with the annual performance evaluation. The proposed contract would be open-ended, while clearly defining the process for resignation or termination. The contract acknowledges that the city manager works at the pleasure of the City Commission, which can choose to terminate the agreement at any time by following the procedure defined in the City Charter. An open-ended contract reduces the potential timeline for termination.

The proposed contract includes the same severance payment guidelines that were afforded Fields, specifically four to 20 weeks' pay, depending upon length of service. No severance payments are required if the city manager is terminated "for cause," with grounds defined by the contract. The city manager would be required to give 30 days' notice for a voluntary resignation.

The fact that Fields had two years remaining on his contract when he was asked to consider early retirement gave him some leverage to bargain for a payoff. Even though he technically was not terminated, Fields received a 10-week "good will" parting gift plus 10 weeks of paid leave, basically the equivalent of severance. The city also made a special exception to allow Fields to buy into the city's general pension plan, even though he only had completed seven of the 10 years of service normally required to be vested.