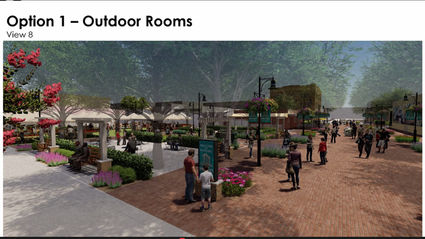 One view of Outdoor Rooms Concept One.

About 30 people participated in an online open house to see two concepts for the central square between Stuart and Park avenues. Attendees were told the 1931 historic clock, designed by the famed Olmsted Brothers Landscape Architects and relocated to the marketplace as part of the downtown revitalization in the early 1970s, will remain a focal point in whatever plan goes forward. And the engraved marketplace bricks recognizing donors will be incorporated into the project.

S&ME's principal landscape architect Jay Hood shared various sketches of what the two concepts might include. Also involved in the redesign are urban planners from Dover Kohl & Associates and engineers from Chastain and Skillman.

Hood called Concept One Outdoor Rooms, a design that included various flexible space areas, a linear public space, tree cover for lots of shade, trellis swings and hanging flower baskets. He labeled Concept Two a Flexible Plaza, which included a larger open space that could include a concert stage setup and area for larger gatherings without having to close Park Avenue. Concept Two also included intimate shaded tree spaces along the outside of the larger central plaza.

Attendees submitted questions online about potential maintenance issues, types of materials that might be used, how to avoid root damage as larger trees grew, possible art installations, and whether the design might incorporate a water feature for children.

Chastain Skillman project manager Doug Forni explained how tree roots can be contained in six by six foot cells with what look like "super strong milk cartons" stacked underground and filled with loose soil. He said the structures bear the weight of the pavement on top so roots stay underground and can thrive and move freely.

Hood said a fountain or possibly a splash pad or other play element for children might be incorporated into the design as "It really should be a multigenerational space."

Responding to maintenance concerns, Hood said, "If you can't maintain it, it's not a successful space."

He also said it is important to choose the right plants and that an artificial turf might be a practical solution in high use areas. The city is looking to hire a horticulturist to oversee the extensive landscaping that is envisioned throughout the Lake Wales Connected plan, not only downtown but the northwest business district.

Attendees were invited to ask additional questions of planners and city staff during online office hours from 11:30 a.m. to 1:30 p.m. Nov. 19.

Online attendees used cell phones to answer a series of questions about how they might use the Market Plaza and which designs they prefer. Outdoor Rooms Concept One was preferred by about 43 percent of those online, while about 30 percent chose Flexible Plaza Concept Two. After obtaining additional public input, the design team will bring back a revised concept and move forward with further design and engineering, to be completed by April 2021. Hood said the goal was to have the Market Plaza built at the same time as the Park Avenue streetscape redevelopment, which is scheduled for construction to begin in mid-2021.

Both concepts include extensive tree planting and landscaping to further the "city in a garden" concept proposed in the Dover Kohl Lake Wales Connected plan. Urban planner Victor Dover and his firm are consulting on all aspects of the project to ensure continuity. 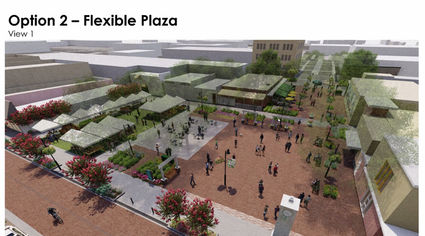 Lake Wales Deputy Mayor Robin Gibson, who chairs the city's Community Redevelopment Agency, said he was pleased with how the planners and engineers are working together on the project. He spoke of the importance of attracting developers to invest in the downtown area, so the increase in property values generates funds for the CRA.

"Obviously the challenge is for us to increase the tax base so that the (tax) increment can cover the cost of this," Gibson said. "We as a community have to come together with a definite strategy for doing this – we've just simply got to make this thing happen."

More information is available on the Lake Wales Connected revitalization plan, Park Avenue streetscape and other city initiatives at http://www.lakewalesfl.gov/projects.