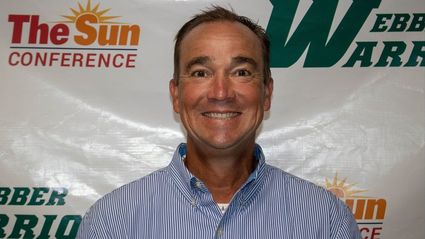 Over a decade since his last year as the Warriors' Head Tennis Coach, Trey Heath has been announced by Director of Athletics Brad Niethammer as Webber International University's Interim Head Men's and Women's Tennis Coach for the upcoming 2021 season.

Heath previously coached both the Warriors' men's and women's tennis programs during the 2006 and 2007 seasons. His 2007 men's team finished the year ranked No. 14 in the NAIA national rankings after advancing to the second round of the national tournament. In 2006, the Warriors were Number 13 in the final poll after again qualifying for the NAIA National Tournament.

"I'm excited to welcome Trey back to Webber," said Niethammer. "He has a strong sense of pride not only for the Webber tennis program, but the university as well. He played a role both as a student-athlete and as a coach for some of our most successful programs and I look forward to seeing him rebuild the Warrior tennis programs."

After winning a state championship in both singles and in doubles as a player at Winter Haven High School and then after spending his first collegiate season at Lees-McRae College in North Carolina, Heath transferred to Webber to finish off his playing career for his father Bill Heath.

Following his graduation from Webber in 1994, Heath served as an assistant coach at Webber while working under his father from 1995 to 1999, and helped the Warriors finish fourth in the 1999 NAIA National Tournament.

"It is an honor and a privilege to be back on the courts that have meant so much to my family for so many years," said Heath. "None of this would have been possible without the great partners I have at H&W Stables and Century 21 At Your Service Realty."

After his final season as Head Coach at Webber in 2007, Heath went on to become the Head Men's Tennis Coach at NCAA Division-II Florida Southern College in Lakeland, Florida. Heath spent the next 10 seasons with the Moccasins, and took them to the NCAA Tournament seven times while winning at least one match during the NCAA Tournament in four of them. Heath and his team won at least 15 matches in a season four times as he finished his career as one of only three coaches at Florida Southern to reach the 100-win mark.

Heath earned his Bachelor of Science degree in Finance from Webber in 1994, and then graduated from Webber in 2008 with his MBA in sports management.