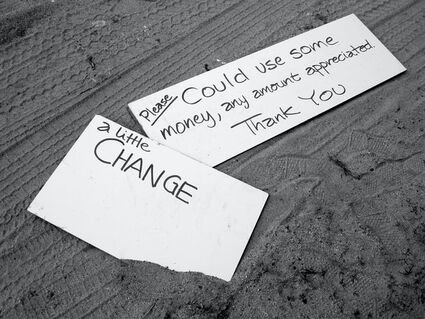 Responding to complaints from downtown visitors, Lake Wales commissioners have unanimously approved the first reading of a new panhandling ordinance for the city.

The new law is patterned after a similar statute from Osceola County, which has not been legally challenged since it was passed about five years ago.

City Attorney Chuck Galloway said finding an ordinance that would hold up in courts is an important part of the new proposed law.

"Several years ago, there was a United States Supreme Court decision that said panhandling was speech. The NAACP had challenged Polk County about their ordinance, and our ordinance was almost identical," Galloway noted. "So everybody around rescinded their existing ordinances."

"You have to address the time, place and manner aspect," Galloway added. "Public health, safety, and welfare has been where the hurdle is, and it's in there."

The six-page ordinance indicates that "The City Commission hereby finds that any person who panhandles or otherwise demands money, gifts or donations under circumstances that warrant a reasonable concern for the safety of persons or property in the vicinity by utilizing or employing tactics including, but not limited to, non-consensual touching, detaining, impeding or intimidation which causes fear or apprehension in another person, constitutes a threat to the public health, welfare and safety of the citizenry."

Deputy Mayor Robin Gibson, himself an attorney, said a lot of thought went into the measure.

"To read that thing, you can see they went to an extra effort to try and make it valid," Gibson said. "If you want a panhandling ordinance, you've got to go with this kind of complexity."

He also noted that the implementation of the "Lake Wales Connected" plan made it a good time to revisit the issue.

"If you look at that Dover-Kohl design, there are a lot of tables out on the sidewalks," Gibson added. "There's going to be a lot of people outdoors. I think we need something like this."

Under the proposed ordinance, continued violators could face up to a $500 fine and up to 60 days in jail.

"It does something to address the issue," added Mayor Eugene Fultz. "When you start talking about public safety, and the welfare of others, that makes the difference. People can be intimidated or something worse when they see this happening."

The ordinance is likely to be adopted after a second reading and public hearing on January 5, at the regular commission meeting. At that time it will go into effect. To review the ordinance check out this link https://www.lakewalesfl.gov/AgendaCenter/ViewFile/Item/8862?fileID=9179