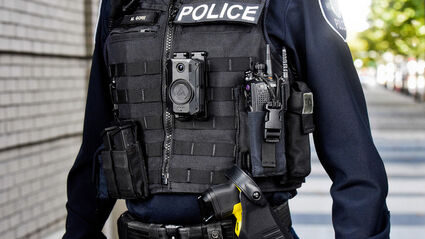 Two Lake Wales city commissioners are calling for the implementation of a police worn body camera system, but it will take a third to make it happen.

Despite having no firm commitment from a third member, Commissioners Terrye Howell and Curtis Gibson insisted that the possible purchase be placed on their Jan. 19 regular agenda.

"Accountability is what we need to look at," Gibson said. "I honestly think it will help officers as well, it protects everybody in the event of a situation."

Howell said citizens are not treated the same throughout the city and body cameras are "a step forward to make our police officers be accountable for what they are doing and saying."

She called for a discussion about "better leadership, different leadership or accountability of leadership."

In previous meetings, the deputy mayor and Goldstein spoke against police body cameras. After a workshop last January Fultz joined Howell and Commissioner Curtis Gibson in calling for body camera implementation, but a decision to move forward was delayed due to budget concerns.

Local attorney Sara Jones submitted a letter to commissioners, renewing the call for police body cameras she has been promoting for more than a year.

"We must utilize best practices if we are to live up to our claims of excellence," Jones wrote. "Body worn cameras aid in officer training by allowing trainers to use actual encounters to instruct trainees on proper procedure and create inquiry into how to better provide law enforcement services; they aid in accountability by giving the most accurate account of police-citizen encounters currently available; they provide the State with evidence with which to effectuate prosecutions in a way that facilitates judicial economy; and they create trust between law enforcement and the community."

Making no recommendation on the issue, City Manager James Slaton estimated the cost for a body camera system, including equipment, software and storage, would run cost about $474,000 for the first five years. That includes $200,000 to hire a staff member to manage video evidence for the police department.

The quote from Axon, the market leader in body cameras, says first-year costs for the equipment purchase and full system would be just under $93,350. Axon costs in years two through five would be about $45,000 per year.

If a majority of commissioners want to proceed with a body camera system they would need to approve a budget amendment of the first-year cost of $133,350. But Slaton acknowledged the actual funds needed during the 2020-21 budget year could be lower depending upon when the system was implemented. The city is already four months into this year's budget.

"If the budget amendment is a little high and the real dollars spent are lower, the money saved will go back into the coffers. Better to be under budget than to underestimate and run over," Slaton said.

Slaton also said the commission might consider delaying purchase and funding the entire project in the 2021-22 budget, which starts Oct. 1.

Howell said if the city can buy police cars and make other purchases it can find the funds to implement body cameras, which she said will help with transparency and building trust.

The Jan. 19 commission meeting is held in the city administration building at 201 W. Central Ave. There is limited space within the commission chambers due to CDC guidelines for social distancing. Citizens also can watch online through the city's website or be able to speak by registering to attend at https://www.lakewalesfl.gov/834/Virtual-Public-Meeting-Registration

It has come to my attention that the matter of mandating Lake Wales Police Department officers to implement the use of body worn cameras has again come before this Commission in a workshop setting.

Many months have passed since I originally stood before you and suggested body worn cameras as a partial solution to tensions within our community, and I am encouraged by the fact that this Commission again has its attention on this issue. As such, I write to you today in several capacities: as a citizen of the City of Lake Wales, in my representative capacity as the President of the Lincoln Community Development Corporation, as an attorney, and as a local business owner.

As a citizen of the City of Lake Wales, I want fairness, transparency, and accountability. I believe that my municipality, where I gladly fulfill my citizenship obligations of paying my taxes, voting in local elections, and volunteering my time for boards and community work, should fulfill its obligation to care for the welfare of its physicality and its citizens.

In my representative capacity as the President of the Lincoln Community Development Corporation, I have stood before this body on many occasions to address the tensions between law enforcement and citizens of this City. This body held a workshop where dozens of citizens came to advocate for the implementation of body worn cameras, and notably few members—other than city officials—advocated against them. During that meeting, the sitting Public Defender, Rex Demmig, appeared personally along with defense attorneys from his office to advocate for the implementation of body cameras.

Private investigator Jill Tuman, of Prison Break Investigations, gave summaries of nearly two dozen reports of police misconduct, each of which the Police Department claim to have investigated and found to be unverifiable. To date, Ms. Tuman reports that no one from the Department has contacted her to get the details of those reports, which would explain the Departments inability to verify them. The community is eager to move ] forward with redevelopment and with a partnership with the City of Lake Wales and its various departments, and requests additional accountability so that issues of verification become readily solvable.

As an attorney and a local business owner, I know that having records is preferable to not having records. Keeping contemporaneous and unbiased documentation is always a better practice than to not. I know that, in my work as a criminal defense attorney, I have come across hundreds of cases where body worn camera footage would have easily solved disputes over whether people made particular statements; people’s appearance, demeanor, and affect; whether officers committed acts of misconduct; and other factual disputes. I have successfully defended cases where the state, through the Judicial Administration Commission, incurred great expense to prove that officers, wittingly or otherwise, committed acts of misconduct. Those cases might not have been filed by the State Attorney’s Office, saving judicial resources, had there been video evidence.

During my short time prosecuting cases, I was able to see first-hand how body worn camera footage was a benefit to all parties. That truth has extended to my work as a criminal defense, family law, and personal injury attorney. The reality is that using body worn cameras have long been acknowledged as a superior practice, and the federal government has issued updated reports to instruct on their effective implementation.

We must utilize best practices if we are to live up to our claims of excellence. Body worn cameras aid in officer training by allowing trainers to use actual encounters to instruct trainees on proper procedure and create inquiry into how to better provide law enforcement services; they aid in accountability by giving the most accurate account of police-citizen encounters currently available; they provide the State with evidence with which to effectuate prosecutions in a way that facilitates judicial economy; and they create trust between law enforcement and the community.

I sincerely hope that you consider each of these factors as well as the fact that body worn cameras are an investment in our city and not simply a line item on a budget report. Please use your authority to mandate the implementation and use of body worn camera for Lake Wales Police Department officers during citizen encounters for the betterment of our great city