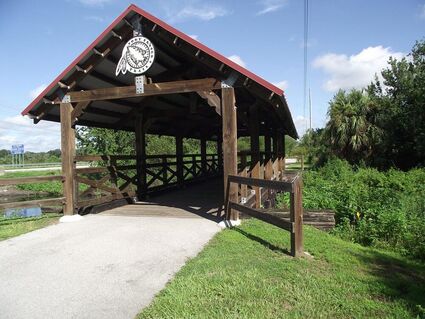 Land donations from Orlando Health and the Sanlan RV & Golf Resort will provide a clear path to an extension of the Fort Fraser Trail.

The donations, which were approved for acceptance by the Board of County Commissioners Jan. 5, will eventually have a paved path that will be developed jointly by the City of Lakeland, Polk County and the Florida Department of Transportation. The trail will parallel the south side of the Polk County Parkway between U.S. 98 and Lakeland Highlands Road. It will connect the Fort Fraser Trail to the city's existing trail system.

"This is a great example of a public-private partnership," County Manager Bill Beasley said during Tuesday's meeting. "We have private property owners who see the mutual benefits of donating the right-of-way for the purposes of a trail. We have state government bringing funding to the table. We have local governments, both city and county, being willing to facilitate the discussions amongst the parties, and this has come to fruition. It's been two years and a lot of hard work on the part of a lot of people."

Once built, those using the Fort Fraser Trail will be able to access the new segment through a crosswalk across U.S. 98. Funding for the trail construction will come from the Florida Department of Transportation. The county's next step will be to design the trail and permit the project.

Commissioner George Lindsey thanked the Holloway family, which owns the resort, and Orlando Health for being willing partners to make this trail extension happen.

He added, "I think it's going to be a great asset to tie the city network to our Fort Fraser Trail network."