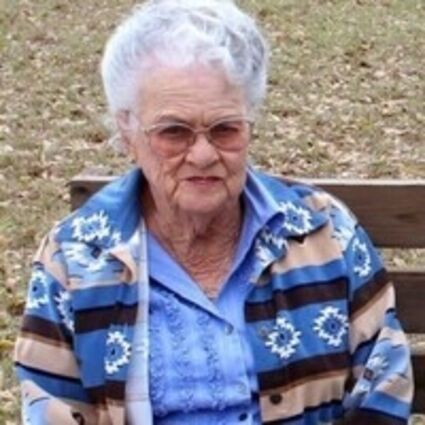 Helen was born in Tampa to Abbie and Addie Jenkins on Feb. 13, 1926. She spent her childhood in Ybor and moved to Lake Wales in her early teens where she met the love of her life, Glen V. Stokes. Helen and Glen spent their first date going to church in the back of a pickup truck. They were married on March 28, 1946 in Lake Wales and spent their honeymoon on a Troop Train headed to California where Glen was stationed for the next year while he served in the US Navy. Helen and Glen had five children and were married for 58 years.

Helen showed true grit throughout her entire life. She was a rancher's wife and would often have 15-20 cowboys around her lace covered dinner table, where sweet tea was served in abundance. She gave birth to her third child alone on her kitchen floor. She went on to earn her diploma as a young mother of five by attending night school.

Helen was a multi-talented woman. She was a musician who sang, played the guitar, piano, and harmonica. She often wrote her own songs as well as short stories and poetry. Helen was also an artist who loved to sketch pictures of biblical scenes, cattle, and historical figures.

As a woman of strong Christian faith, to know Helen, was to know the love of Jesus. Helen was a member of Golfview Baptist Church, where she taught Sunday School and sang in the choir, and she made sure her family spent their Sundays in Church.

Helen held many jobs over her lifetime. She was a switchboard operator, delivered mail, was a homemaker, and a rancher. She loved to ride around the pasture counting calves and checking on their mamas.

Helen was preceded in death by her husband Glen V. Stokes and first-born son James Stokes. She is survived by her daughter-in-law Rhonda Stokes (widow of son James), son David Stokes and wife Sheri, son Ronald Stokes, son Stewart Stokes, and daughter Glennis Glover and husband Tim. She was adored by 11 grandchildren and many great-grandchildren.