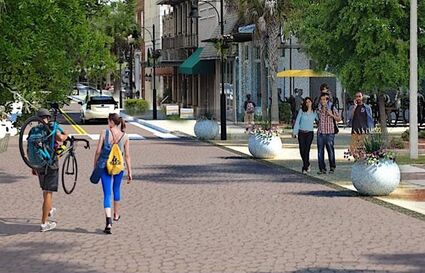 City leaders are anticipating shovels in the ground this summer in what will be the first project in its award-winning "Lake Wales Connected" revitalization plan for the historic downtown and northwest neighborhood areas.

The Lake Wales Community Redevelopment Agency (CRA) approved several measures this month which set the wheels in motion on several projects in both areas.

The board approved an agreement with Chastain-Skillman Inc. that will provide construction documents and construction phase services related to year one of the Northwest Sidewalks & Street Trees Improvement Plan.

City leaders presented a virtual open house on Jan. 6 to outline the five-year plan, and made recent presentations to two different stakeholder groups.

"This agreement addresses each of the year one priority streets and will be influential in establishing Lake Wales as a 'City in a Garden'. Reactions to the plan were positive and the city is prepared to move forward with design work to ensure construction begins on schedule in fiscal year 2022," City Manager and CRA Executive Director James Slaton said.

Among the streets identified for work in the first year are Dorsett and Seaboard avenues, along with a section of East Crystal Avenue and Orange Avenue west of First Street, and a section of Seminole and Sessoms avenues just east of First.

The CRA board, which is made up of the current city commissioners, also approved a consulting agreement with Chastain-Skillman that will provide professional services related to the 1st Street Streetscape design in accordance with the Lake Wales Connected plan.

The agreement calls for the engineering firm to produce construction ready design drawings for 1st Street – from Central Avenue to Wiltshire Avenue – that will include plantings, lighting, sidewalks, parking, and street furniture.

"All of our projects are on schedule," Slaton added. "We're moving forward, everything is rolling. We're on track with the various project timelines. We're at 90 percent design on the Park Avenue Connector Trail and the Park Avenue Streetscape & Market Plaza projects,"

Slaton said bids could go out as early as this spring.

Most of the funding for implementation of the Lake Wales Connected plan will be coming through the CRA, and not the city's general fund. The CRA gets most of its revenue on improvements made within certain geographic boundaries. Increased tax revenues based on those improvements go back to the CRA to be used for future investments in those areas. Slaton said the CRA should receive over $2 million in revenue during the current fiscal year.

"Everything that we've talked about is bringing up the tax increments," Mayor Eugene Fultz noted. "Property is going to be appraised at a much higher rate when all these things are done. It's really lifting the city in more ways than one."

The FRA annual awards program recognizes the best in redevelopment in the state of Florida. The honor is picked by a jury of community development professionals involved in economic development.