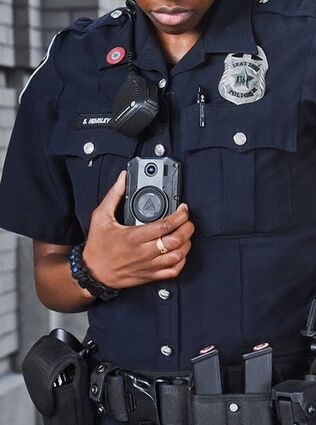 After 90 minutes of passionate testimonials from citizens raising concerns about local police, Lake Wales city commissioners voted unanimously to implement a pilot program with eight police worn body cameras. Mayor Eugene Fultz predicted that eventually every officer in the city would be outfitted with a camera.

The commissioners approved a five-year commitment for the first eight cameras, which will cost $15,000 per year for the equipment, software, licensing and cloud storage. City Manager James Slaton said it would take about 6-8 weeks to receive the equipment, develop policy and train officers.

Before voting for the 8-camera pilot, Deputy Mayor Robin Gibson expressed support for a three-month trial with four cameras, offered free to the city. Noting the city now spends about $4.8 million per year for the police department, Gibson suggested if there were still police issues after the first 90 days he would recommend the city manager begin negotiating with the Polk County Sheriff's Department to take over law enforcement services in the city. Gibson said over five years the full implementation of 32 body cameras would cost about a half million dollars, money he felt could be better spent on other city priorities. Polk Sheriff Grady Judd does not support use of police worn body cameras.

Commissioners have been discussing body cameras for more than a year, and Commissioner Terrye Howell said, "We've talked about this so much it is sickening." The pilot program was a compromise from full departmentwide implementation, which was the preference of Howell and Commissioner Curtis Gibson.

"Any law enforcement officer that deals with people in the community ought to wear a body camera," Commissioner Gibson said. "There needs to be firm policy, meaning if you interact with the public, cameras on. You cannot shut it off or you will be gone."

Howell said turning on the camera should be automatic like when officers exit their vehicles and always check for their weapon.

"If you're engaging with anyone, I don't care where you are, but especially in the Northwest section, you need to have your camera on and it needs to stay on," Howell said, noting cost should not be an issue. "When we're putting lives on the line to hear it's too much money, I don't get that."

Commissioner Al Goldstein, who previously opposed body cameras, made the motion to move forward, noting "We've got to start some place." Goldstein called for citizens, especially local ministers, to come together to work to rebuild trust and move the city forward.

Fifteen citizens spoke about their own or others' interactions with local police, saying many people were afraid to speak up due to possible retaliation. The expressed concerns that a few bad officers were making the whole department look bad.

Former 15-year police officer Michele Threatt said it breaks her heart that people are afraid of the police and that she didn't speak up before: "When I was in law enforcement I kept my mouth closed because it's really unspoken you don't go against your fellow officers. How long are we going to wait to do something? Are we going to wait until someone dies?"

Several referenced a recent arrest, where an Officer Colt Black changed his original statement after reviewing a home security video, resulting in charges being dropped. Black resigned and a second officer, Travis Worley, is on administrative duty, pending an investigation into allegations that he used racial slurs, kicked and struck a man while he was handcuffed on the ground.

Pastor Lorenzo Smith urged commissioners to listen to the citizens and address their complaints: "There's an outcry – people are crying out for help. Hear the voice of the people. They are really crying out."

Mayor Fultz told the attendees their concerns "did not fall on deaf ears. I am a 71-year-oold black male living in America. This is not the first time I've heard everything you brought forward. I have children, grandchildren and great grandchildren in this area and I am definitely concerned with them and their future."