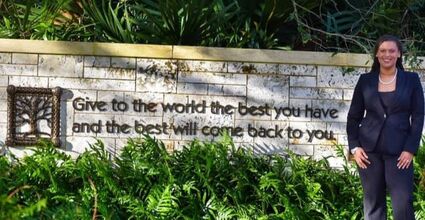 Lake Wales attorney Sara Jones has spent hundreds of hours volunteering to help redevelop the city's Northwest business district. On Tuesday Feb. 9 she took the first step to, as she said it, "put her money where her mouth is."

Sara Jones Law submitted the successful proposal to purchase two city Community Redevelopment Agency lots on Lincoln Avenue to build a multipurpose professional office building and event venue. City commissioners, who serve as the CRA Board, accepted her offer of $10,047 for the property.

"The firm has a long history engaged in community partnership in the North West Community and throughout the City of Lake Wales," wrote city Development Services Director Mark Bennett in his cover memo for the CRA agenda item. "Since formation, the firm has donated thousands of dollars to community organizations such as the Green and Gold Foundation and the Lincoln Community Development Corporation along with contributing hundreds more in donations to local schools."

Jones is a co-founder and president of the Lincoln Community Development Corp., a nonprofit formed in late 2019 to support redevelopment of the Northwest business district.

"Stimulating community development and entrepreneurship that provide relief to the poor, the distressed, the underprivileged," are part of the Lincoln CDC's mission, along with facilitating "preservation of history through erection and maintenance buildings monuments, or works benefitting the public; that lessens neighborhood tensions; builds bridges of unity between diverse people; eliminates prejudice and discrimination; and that combats community deterioration, juvenile delinquency, and elder isolation."

Jones said the three-story building she is proposing will include professional office space and conference rooms, not only for her law office, but also community partners. The top floor will be a venue for conferences, seminars and upscale events, equipped with bathrooms and a kitchen, that could be converted into a residential unit. The project is expected to begin within the next 18 months.

Development of her law office headquarters on Lincoln Avenue should increase the tax base, bring others in and encourage investment in the area, Jones said.

Also at the Feb. 9 CRA meeting the board agreed to donate two lots on B Street to the Keystone Challenge Fund to build two single-family affordable homes. The CRA purchased the lots from the Green and Gold Foundation for $10,000. The CRA expects to recoup its investment in less than four years with the tax increment generated by the property taxes on the homes.

CenterState Bank provided a grant for $30,000 in down payment assistance. With an estimated value of $170,000 each, the houses are expected to serve as a catalyst for further development along B Street. Site development is expected to start during the first quarter of 2021 and take approximately four months from start to finish.

"When property is put into the hands of the CRA, we're moving that property and ultimately enhancing the tax base," said CRA Chairman and Vice Mayor Robin Gibson. "I'm just really very pleased."