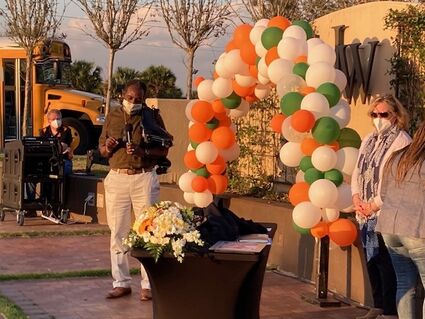 Charter Schools Superintendent Jesse Jackson thanks community well-wishers as he departs after 13 years in office.

Sporting a pair of black roller skates over his shoulder, outgoing Lake Wales Charter Schools Superintendent Jesse Jackson thanked dozens of well-wishers, saying he was ready to "skate off into the sunset."

The outdoor reception at Lake Wales High School Feb. 24 marked the end of his 13-year leadership stint here, but he promised to continue supporting the local charter schools, possibly returning to help with staff development through a new job he's beginning in a few weeks at the Florida Department of Education.

High School Principal Donna Dunson choked with emotion as she spoke about Jackson's leadership and support for her personally and her school that achieved amazing gains and national recognition in the past decade. Other principals thanked him for making them stretch and grow and for giving them support, but not dictating how they should run their schools.

Former Lake Wales City Commissioner Kathy Manry Smith, a 1964 graduate, talked about how Jackson had led the charter system back to the greatness the local schools were known for when she attended. She marveled how Jackson's focus on the top students helped challenge the lower achievers to excel. Lake Wales High School now boasts a 95 percent graduation rate, a more than 20-point gain since the charter system opened its doors in 2004, and has been recognized by U.S. News and World Report magazine as one of the top high schools in the nation.

"You've put Lake Wales on the map as far as education is concerned," Fultz said. "You've set us in a position where people desire to come to Lake Wales for the education you provide and because of the changes you have made in order to include everyone in the goodness and the greatness that is going on here in Lake Wales."

Robin Gibson and Clinton Horne, two of the founders of the charter system, were among several speakers, who praised Jackson's service.

"I'd like to say I enjoyed the journey with Dr. Jackson. Most of the time I call him Jesse," Horne said.

Gibson pointed out that Jackson was superintendent throughout the entire time some local children were in school and who "graduated in a much better system than they started, and Jesse Jackson had one heck of a lot to do with that."

Attorney and former charter Trustee Chairman Keith Wadsworth said his daughter Isabel grew up in the system from first through twelfth grades and is now a senior in college, headed off to law school, and "a huge part of her success is her time here in the charter school system."

"Leadership matters. Success does not happen by accident," Wadsworth said. "He was a tremendous leader and the success that came with that speaks for itself. We are a better place and better people and better students and better community because you were here. We're going to miss you." 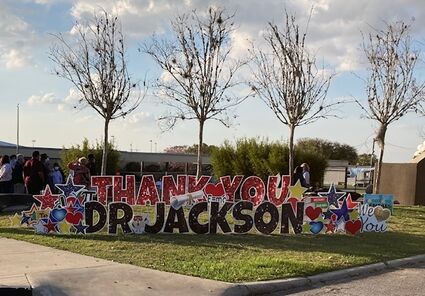 Current Trustee Chairman Andy Ogontola said the system's achievements were important, but he wanted to speak about what a good man Jackson is. Oguntola said there were hundreds of stories of Jackson as a caring person, including how he once offered up a hundred dollar bill from his own wallet to help a barefoot child Oguntola found on the streets. Oguntola said Jackson was well-known and recognized as he visited schools and didn't hesitate to visit the homes of students who needed help.

"The man himself has put blood, sweat and tears into this system. He's come to work every day knowing he was going to make a difference for the system, for the children of Lake Wales," Oguntola said. "He's been a great man. He's been a transparent man. He's been a leader, a father and husband, but most importantly he has been the superintendent of the Lake Wales Charter School System."

Jackson challenged charter system employees to continue focusing on working together as a team. He said despite leaving the system, he will always be available to offer support.