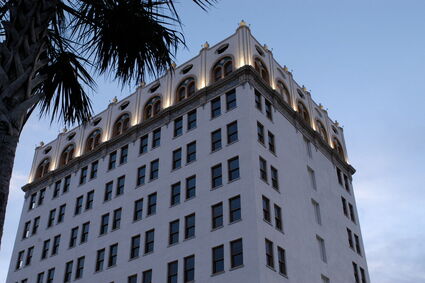 Lake Wales city commissioners at their March 16 meeting are expected to authorize legal action that could lead to the city taking back the historic Dixie Walesbilt Hotel.

Also called the Grand Hotel, the 10-story structure built in 1926 remains empty and only partially restored since it was turned over to developer Ray Brown more than 10 years ago.

The city spent about $7,000 for attorney Kevin Ashley with the Peterson Myers Law Firm to research whether the city has grounds to sue Brown for breach of contract. Ashley concluded that Brown's company, Dixie-Walesbilt LLC, committed multiple material breaches of the 2010 redevelopment agreement with the city, providing what Ashley called a solid factual basis for a lawsuit.

City commissioners at their agenda workshop March 10 agreed to allow City Manager James Slaton to bring forward an agenda item where they would authorize him to notify Brown about the potential lawsuit, giving him 30 days to come up with $80,000 he committed in the contract - $50,000 for sidewalk improvements and $30,000 to the local historical society, whose assets are now owned by the city. The notice also would give him 45 days to "cure" non-financial commitments.

In the 69-page redevelopment agreement Brown committed in February 2010 that within 30 months the company would:

- construct a health club in the hotel of up to 5,000 square feet in size

- construct up to 40 residential units within the hotel

None of those improvements were made during the time period, but Brown eventually painted and made other improvements to the building's exterior along with some interior finish work. The city acquired the hotel in 2008 after the previous owner was cited for multiple code violations.

Ashley advised that implementation of the notice and cure period will require deliberate planning and oversight: "The contract language providing Dixie-Walesbilt with an opportunity to cure non-monetary breaches lacks specificity and good, verifiable guidelines. That could be advantageous to Dixie-Walesbilt as a delay tactic in the short run, but ultimately not avoid a trial taking place or a judgment being entered."

Various commissioners over the years have expressed frustration with Brown's lack of progress, which he has repeatedly blamed on lack of cooperation from city staff. Now Brown claims Deputy Mayor Robin Gibson is obstructing the project and has a personal vendetta against him.

Gibson has been the prime mover of action against Brown, and information from a 2014 lawsuit Gibson filed on behalf of architect Ed Pilkington was included in Ashley's legal opinion.

Ashley questioned the veracity of Brown's stated qualifications as a developer and whether Brown had in fact invested $1.5 million in private capital into the project, which the city required before turning the hotel's title over to Brown. During the Pilkington lawsuit, Brown provided bank records documenting less than $77,000 in actual expenditures on the hotel between September 2008 and May 2011. The city, however, accepted an affidavit from Rodger McCoy of Rodger McCoy Development, affirming the renovations Brown had completed would have cost more than $1.5 million if McCoy's company had been hired to do the work.

Brown said he plans to attend the city commission meeting Tuesday to defend himself.

Brown's development partner, Rick Gonzalez with REG Architects in West Palm Beach said he is still "very interested in assisting Mr. Brown and the City of Lake Wales in bringing this jewel of Lake Wales back to its glory in the next two years."

Gonzalez, who has extensive experience restoring historic buildings and has served as vice chair of the Florida Historical Commission, said with the COVID-19 pandemic waning, he is hopeful financing can be obtained for the Walesbilt project later this year. 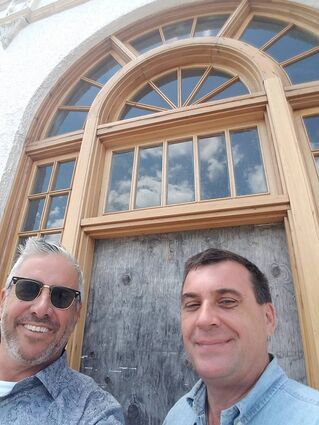 "It's a shame that support from the City/CRA for this important historic downtown project has never really existed. Redeveloping a 10-story historic building in a small downtown is very difficult to do, especially when there are people not supporting the project," Gonzalez said, noting it took the historic Gulfstream Hotel in Lake Worth 10 years and three attempts at financing to get off the ground."

Deputy Mayor Gibson said he is tired of people asking him what's happening with the hotel and that the four previous city managers in dealing with Brown have been "more than patient." Mayor Eugene Fultz said for seven of his eight years on the commission, "I've talked with, I've worked with and I've walked with Ray Brown," whom he said has rejected offers to help with or finance the project: "He wants to do it his way or nothing at all . . . you can give me the money, but I'm still going to do it my way."

Commissioner Curtis Gibson said he believes Brown might be willing to sell the building and he'd like city officials to sit across the table from him and try to work something out rather than spending tax dollars on a lawsuit.

After watching the city commission for the last 5-1/2 years, one would hope that they had learned their lesson and would not wamt to embarrass themselves further