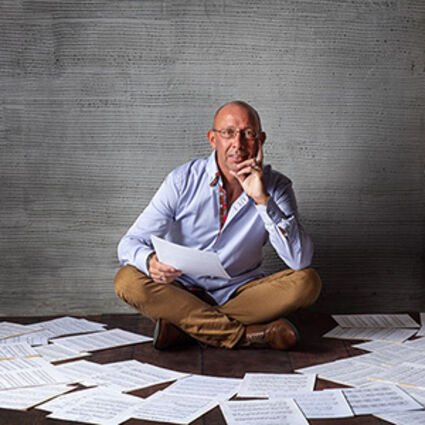 Bok Tower Gardens carillonneur Geert D'hollander says the music of The King's Singers has inspired him since he was a child. That's why he is especially thrilled that the famed a cappella group awarded his original choral composition their top New Music Prize for 2021.

"Winning this competition is an incredible honor as a musician and one of their biggest fans," said D'hollander, a Belgium-American who became Bok carillonneur in 2012. "To me, it's like standing in front of Picasso with hundreds of other people holding a little painting, and he picks yours. How awesome is that."

Chosen from among hundreds of entries, D'hollander received a $1,500 prize and the opportunity through publisher Walton Music to have his composition made available for public performance.

According to their website, the King's Singers represent the gold standard in a cappella singing on the world's greatest stages for over 50 years.

Here's how the judges explained why they chose D'hollander's original composition for their top prize, "The jury all agreed that the closeness and lushness of the chording would suit The King's Singers very well, and the rhythmic and metrical variations within the music and text-setting gave it a freshness not often seen in this kind of modern writing."

D'hollander graduated with honors from the Royal Conservatory in Antwerp, Belgium, with degrees in piano, chamber music, choral conducting, harmony, counterpoint, fugue, composition, and he graduated with honors from the Royal Carillon School. He has written more than 80 compositions, mostly commissions for carillon and was first prize winner in more than 30 international competitions.

In 1997, D'hollander was appointed as University Carillonneur and Professor of Carillon at the University of California at Berkeley. In 2008 he was awarded the Berkeley Medal for "Distinguished Service to the Carillon." Before moving to Florida in 2012, D'hollander taught carillon and carillon composition at the Royal Carillon School, and he was the city carillonneur of the historical instruments of Antwerp Cathedral, the belfry of Ghent, and the Basilica of Lier, Belgium.

When not performing at Bok Tower Gardens, in one of the most unique and prestigious carillon positions in the world, D'hollander frequently gives master classes in Europe and the U.S. and performs all over the world.

"In a year full of challenges, setbacks and divisions, we were all profoundly encouraged and inspired by the number of first-rate composers – of all ages and from all walks of life across North America – who felt moved to write a brand new piece of music for this competition," said Jonathan Howard, bass in The King's Singers and the group's representative on the New Music Prize jury. "Our primary aim for the New Music Prize was always to promote how valuable both creativity and music can be for revitalising and restoring us."