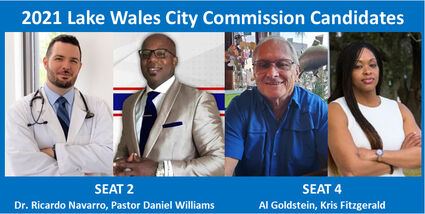 Dr. Ricardo Navarro and pastor Daniel Williams are seeking election to Seat 2, which is being vacated by two-term Commissioner Curtis Gibson. Challenging incumbent Al Goldstein for Seat 4 is Kris Fitzgerald, a licensed mental health counselor who works for The Vanguard School.

A retiree, Goldstein, 79, is completing his first term as a commissioner. He was elected without opposition in 2019 when incumbent Commissioner Tonya Stewart fell short of the petition signatures she needed to qualify.

Goldstein moved to Lake Wales eight years ago. His family traces its Florida roots back to 1845, and Goldstein grew up in Hollywood in South Florida. He served as a U.S. Marine, worked in government and contract services and owned his own business prior to retiring in 1995. His priorities for Lake Wales are community trust, education, smart growth with economic development

Fitzgerald, 40, serves as director of residential life at the Vanguard School. A U.S. Air Force veteran, Fitzerald grew up in Lake Wales and lived here except for her time in the military and college. Her priorities for Lake Wales are economic and business development, community and local governmental unification and recreation and youth services.

Navarro, 33, is an internal medicine physician, owner and president of Navarro Medical. He also is a consulting physician for Vitas Healthcare and medical director for the hospitalist medicine program at AdventHealth Lake Wales. He has spent most of his life in Lake Wales, where his father, the late Rene Navarro, also practiced medicine. His priorities for Lake Wales are community, beautification and business.

LakeWalesNews.net and Rotary on the Ridge co-sponsored a candidate forum March 1. The Facebook Live video can be viewed at https://www.facebook.com/247504432355875/videos/3578357928879748 The Williamson Photography video of the 2021 Lake Wales City Commission candidate forum is available on You Tube at https://youtu.be/CU5pQcxhnLw

Candidates must live within the district they represent, but are elected citywide for 3-year terms. In addition to the two commissions seats, the municipal election will have seven proposed changes to the city charter. Questions for the candidate forum to consider may be submitted to https://tinyurl.com/LakeWales2021