What Time is It? 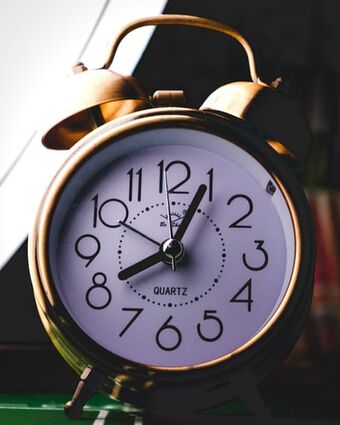 When I woke up at 6 a.m. Sunday morning, my phone displayed 6 (I believed it had done what it was supposed to, but I wasn't sure), the clock on my nightstand displayed 8 a.m. (the hour I moved it up plus the hour it automatically adjusted), and the clock on the microwave, which I did not adjust before going to sleep, displayed 7.

My mind is not at full strength when I first wake up (let's be honest; it's not full strength at any time during the day), so it took me a minute to figure out what time it really was. Thankfully, I figured it out and made it to church on time.

There are many people today who do not know what time it is. They live carelessly and callously with no sense of the late hour in which we are living.

The Lord Jesus told His followers that He would return to receive them, that where He was, they would one day be (John 14:1-3) As predicted in Scripture, there are those who scoff at the idea; maybe not verbally, but by the lives that they live.

Some unbelievers mock, saying, "Christian's have been saying that for 2000 years." The fact is, it has been true for 2000 years. All that means is that we are closer to His return than we have ever been, and with each passing hour bringing us that much closer.

Unbelieving friend, "And the times of this ignorance God winked at; but now commandeth all men every where to repent:" (Acts 17:30)

Time is a precious thing of which all are allotted but a short amount. Scripture says, "... it is appointed unto men once to die, but after this the judgment: So Christ was once offered to bear the sins of many;" (Hebrews 9:27, 28) Death is an appointment that we each will keep. Death is the result of sin. "For the wages of sin is death;" (Romans 6:23). "Wherefore, as by one man sin entered into the world, and death by sin; and so death passed upon all men, for that all have sinned:" (Romans 5:12).

Did you catch Hebrews 9:28 above? It says, "So Christ was once offered to bear the sins of many;" God gave His Son, Jesus Christ, as a sacrifice, a substitute to die in the place of "many." Who are these many? John says, "But as many as received him, to them gave he power to become the sons of God, even to them that believe on his name: Which were born, not of blood, nor of the will of the flesh, nor of the will of man, but of God." John 1:12, 13)

The "many" consist of those who receive Jesus Christ as Savior. To "receive" is to take what is given. Becoming a Christian is not accomplished by our bloodline; we do not inherit salvation through our parents, grandparents or otherwise. Neither is becoming a Christian the result of one's changing their lifestyle, or by the wishes and desires of others.

Salvation was accomplished through Jesus Christ; His dying, being buried, and rising again in victory over sin, death, Hell, and the grave. A person becomes a Christian by receiving, by faith, Christ's payment on their behalf as sufficient to meet the requirement set by God.

Dear reader, if you have not yet turned from trusting in yourself as sufficient to meet God's requirement and received, by faith, Jesus Christ as Lord and Savior, now is the time.