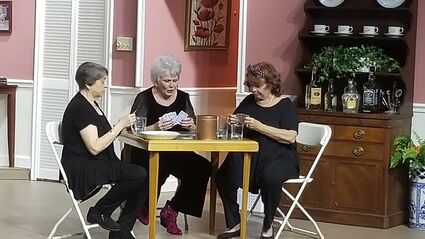 Longtime friends Connie, Leona and Millie gather for one more bridge game with the ashes of the recently departed Mary.

Opening March 12 for a three-weekend run at Lake Wales Little Theatre, Exit Laughing, a popular and laugh-out-loud funny play by Paul Elliott, tells the story of four Southern ladies whose weekly highlight for 30 years is gathering to play cards. When Mary dies, ditzy Millie "borrows" her ashes from the local funeral home for one last game of bridge at Connie's home.

Prior to her death Mary arranged for some surprises to arrive – including a college student moonlighting as a stripper - to shake up her friends and encourage them to start living the fuller life she would have wanted. Connie's college student daughter Rachel doesn't appreciate when her mother and friends show there's still a lot of life left in the old gals.

Director Leslie Grondin made some adjustments to the script to suit our audience. But there is still one reference to the act that made Monica Lewinsky a household name, and randy hairdresser Leona spouts colorful language and discusses her propensity to date married men.

If you're especially bothered by adult content and off-color language, the Lake Wales Little Theatre production of Exit Laughing might not be your cup of tea.

"Recognizing our frequent patrons we tried to tone things down a bit, but some of the language and content is important to the story line," Grondin said. "We hope our patrons enjoy not only the humor but also more poignant moments in the play."

The cast includes frequent performers Dorinda Morrison-Garrard as Connie, Pat Schatz as Millie and Ian Elliott as Bobby, along with Leah Hagen as Rachel and Chevon Baccus as Leona, both returning to the LWLT stage after many years' absence. 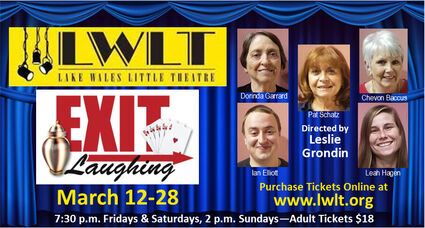 Volunteers have been building the set nights and weekends, creating Connie's living room, where all of the action takes place in two acts, lasting about an hour and a half. LWLT President Terry Higginbotham controls the lighting while Board Member Mike Baccus handles sound. Grondin's teenage daughter, Peyton, serves as stage manager with support from Karen Fewell.

Located at 411 N. 3rd St., the theater offers an intimate setting with raked rows for good visibility. To follow CDC guidelines, only about half of the 140 seats are being sold, and patrons must wear masks. The theater is being sanitized between performances and other efforts are being made to reduce interaction.

Tickets are $18 for adults and $12 for those 18 and under. (Reminder: Adult content and language.) Purchase tickets and choose seats online at http://www.lwlt.org. Tickets also are available at the theatre box office from 10 a.m. to 2 p.m. Wednesdays or by calling 863-676-1266.