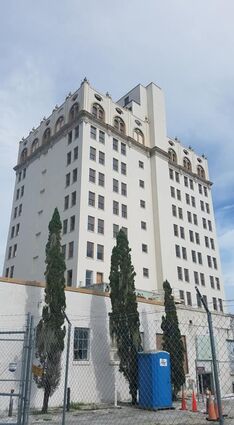 Lake Wales City Commissioners March 16 agreed to notify the owners of the historic Walesbilt Hotel that they are in breach of their development contract – the first step in the city potentially trying to regain ownership of the property.

Developer Ray Brown, the principal of Dixie-Walesbilt LLC, tried to convince commissioners that he had met the two major milestones put in place more than 10 years ago. But only Commissioner Curtis Gibson voted to hold off on the notice, suggesting the city should sit down with Brown and try to work out a plan for him to proceed with development.

Brown passed out a December 2014 letter from now Deputy Mayor Robin Gibson to former City Manager Ken Fields recommending the city put in motion a plan to take back the hotel. Gibson wasn't yet a commissioner and wrote the letter as a private attorney who represented architect Ed Pilkington in a lawsuit against Brown.

Brown claimed city officials were cooperating with his efforts to redevelop the hotel until attorney Gibson got involved.

"Ken Fields was initially very helpful with the hotel until he got pushed by Robin Gibson to attack me," Brown said, noting other development services staff members also put up roadblocks to the project.

Deputy Mayor Gibson said the action wasn't personal, but due to the LLC not fulfilling its contractual obligations.

Brown said he how has a potential buyer or investor in the hotel project and the hotel could be restored within about nine months of determining the final use and obtaining permits. He said his initial plan was to create 93 hotel rooms, but he now is exploring the possibility of a mixed development with some hotel rooms along with senior apartments with shared kitchen facilities.

Brown said Mayor Eugene Fultz's comments at the March 10 workshop that he had turned down funding were incorrect. He said one potential partner wanted to develop a "gay hotel;" Brown said the man couldn't come up with the funding and that Brown objected to the project concept. Brown said former Mayor Mike Carter once proposed the hotel be turned into a casino, which wasn't allowed under Florida law.

The city paid attorney Kevin Ashley of the firm Peterson-Myers about $7,000 for a legal opinion whether the city had grounds for a lawsuit. In a 9-page memo Ashley concluded that Brown's company, Dixie-Walesbilt LLC, committed multiple material breaches of the 2010 redevelopment agreement with the city, providing what Ashley called a solid factual basis for a lawsuit.

The notice gives Brown 30 days to come up with $80,000 – which includes $50,000 he committed for sidewalk improvements and $30,000 promised to the local historical society, whose assets are now owned by the city.

The notice gives Brown 45 days to "cure" non-financial breaches to the contract. In the 69-page redevelopment agreement, Brown committed in February 2010 that within 30 months his company would:

- construct a health club in the hotel of up to 5,000 square feet in

- construct up to 40 residential units within the hotel

None of those improvements were made during the time period, but Brown eventually painted and made other improvements to the building's exterior along with some interior finish work. The city acquired the hotel in 2008 after the previous owner was cited for multiple code violations.

Brown acknowledged that there is no way he can comply within the 45 days. The issue will be brought back to the city commission to determine whether they want to proceed with a lawsuit to take back the hotel.

Commissioners also March 17 put in place the first steps for working with developers of distressed property through a memo of understanding. Future re-developers would be asked to put funds from liens due to code violations or their own investment money into escrow accounts, which would be used to reimburse the developer as property improvements were completed.

When I moved here in July of 2015, there was talk of the Walesbilt Hotel becoming a major source of hotel rooms for Legoland. Since that time, there have have been 3 hotels built between here and Legoland znd another hotel has been closed. What a pro-business message is being sent to prospective investors by our City Commissioners! We have an election coming up shortly. We are being presented with a golden opportunity to get rid of some deadwood and elect some people who really want to see Lake Wales succeed.