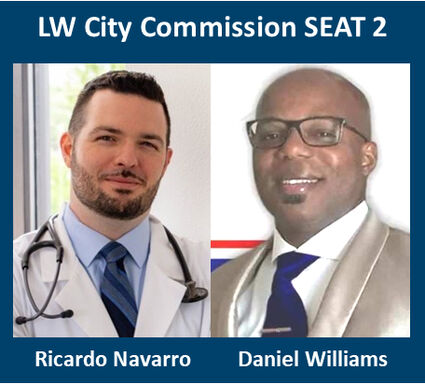 Seat 2 on the Lake Wales City Commission will have a new occupant after the April 6 municipal election – either Ricardo Navarro or Daniel Williams. Incumbent Commissioner Curtis Gibson is not seeking re-election, but is instead considering a run for Lake Wales mayor in 2022.

Navarro, 33, is an internal medicine physician, owner and president of Navarro Medical. He also is a consulting physician for Vitas Healthcare and medical director for the hospitalist medicine program at AdventHealth Lake Wales.

He has spent most of his life in Lake Wales, where his father, the late Rene Navarro, also practiced medicine. His priorities for Lake Wales are community, beautification and business.

Navarro started his campaign in December and by the end of February collected 21 donations averaging $357 for a total of $7,500. As of April 1 he reported only spending $3,198, a majority on full-color signs with his photo in doctor attire with a stethoscope around his neck, using the tagline "Healing Lake Wales." He did a postcard mailer toward the end of the campaign, but that expense wasn't included on the April 2 report, and he could not be reached for more details about the omitted expense. He also spent $300 on a campaign consultant, $175 for a video and a little over $800 for food for various campaign events.

Williams' April 2 report showed contributions from 58 donors averaging $96 for a total of $5,592. Williams reached out to friends and family far beyond Lake Wales, encouraging them to donate through the CASH App on their phones. Williams also had full-color campaign signs with his photo on them and the slogan: "Connecting Communities and Cultures with Values and Vision." He also paid for flyers, postcard mailers and other candidate expenses totaling $6,871.

When it was pointed out that his April 2 report showed $1,200-plus in expenses more than he had in contributions to cover them Williams said his campaign treasurer would be amending the report to show about $1,300 in contributions made during the first reporting period but omitted from the paperwork. He said earlier reports did not include a $200 donation from Sadie Anderson and $500 donations from Roscoe Williams and Patricia Smith.

Both candidates have been actively promoting themselves on social media. Neither candidate has served on any city committees or been involved with city government.

Navarro is a member of the Lake Wales Breakfast Rotary Club and has served on several medical-related committees for Advent Health.

Williams has been more involved in the community, serving as chair of Independent Living Advisory Committee with Heartland for Children for 8 years. He also is a member of the local NAACP branch, a board member at the Lake Wales Care Center, member of Lake Wales Ministerial Alliance and previous president and current board member of the Highland Crest Homeowners Association.

For more details on these candidates, please see stories at the following links: