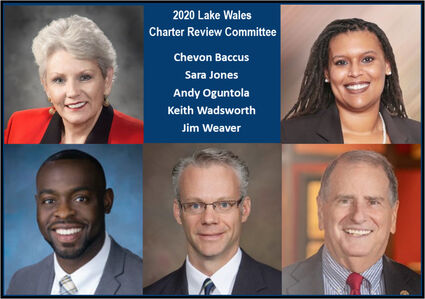 Lake Wales voters April 6 approved by wide margins, ranging from 82 to 92 percent, all seven proposed changes to the City Charter.

AMENDMENT 1 - MISSION STATEMENT: More than 88 percent of the voters approved adding the following mission statement to the city charter, by a vote of 1,662 to 218: The mission of the City of Lake Wales is to serve and unify its citizens, to foster economic growth while building on our City's existing small town values, and to promote the Bok ethic that we make our City "a bit better and more beautiful" for our being here.

AMENDMENT 3 - FILLING VACANCIES: Nearly 86 percent of the voters agreed by a vote of 1,629 to 267 to change how commission vacancies are filled. Currently if a commission seat is vacated, the city commission appoints a replacement, who serves for the remainder of the three-year term. The change calls for the vacancy be placed on the ballot to be filled by the voters if more than one year remains in the term. The commission appointee would only serve until the seat is filled in the next city election. The newly elected commissioner would serve the remainder of the unexpired term.

AMENDMENT 4 - CITY MANAGER RESIDENCY:Nearly 93 percent of the voters agreed by a vote of 1,722 to 132 that the city manager must live within "the greater Lake Wales area" within six months of employment.

AMENDMENT 5 - PURCHASING: More than 82 percent of the voters approved by a vote of 1,485 to 318 a charter change to streamline the purchasing process by eliminating the requirement that the city manager must personally approve every city purchase, which created a significant paperwork burden and took time away from the manager's other duties. The change will align the purchasing policy with whatever the existing ordinance says at that time.

AMENDMENT 6 - TIMELINE FOR BUDGET AND 5-YEAR CAPITAL IMPROVEMENT PLAN: More than 90 percent of the voters agreed by a vote of 1,598 to 174 that the city's annual proposed Capital Improvement Plan should be submitted for commission consideration at the same time as the annual budget, not three months ahead.

AMENDMENT 7 - DUTIES OF THE MAYOR: More than 88 percent of the voters by a vote of 1,624 to 214 agreed to alter the duties of mayor to allow commissioners a greater role in recruiting and recommending appointees to various city boards, committees and commissions.