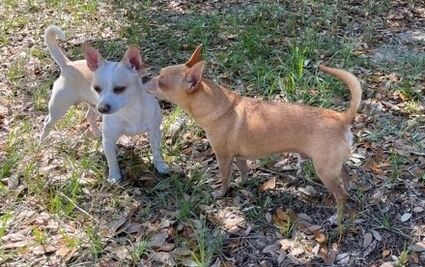 Missing dog Valdez, right, is happy to be home and meeting his new brother, Kogi.

Sandy Dent never gave up hope, and after more than nine months her missing chihuahua, Valdez, is finally home.

Dent regularly checked lost pet sites and posted photos on social media, hoping someone would recognize Valdez, who ran off last July 4 after being frightened by fireworks.

As it turns out, Valdez has been well cared for by three different women and even added three pounds to his former 9-pound frame.

"I said I would not give up, and I didn't," Dent said. "This is proof that there is hope for all those poor pets out there that I have been looking at every day that have been report...