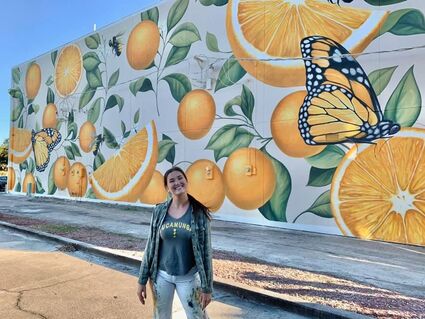 Landscaping beds in parking lot by new mural will include plants that attract butterflies.

Lake Wales Main Street's most recent mural project at Scenic Highway and Stuart Avenue called "Slice of Happiness" is about to get a whole lot happier.

With a new full-time horticulturist hired by the city, Lester Gulledge is making one of his first priorities the beautification of the area around the nearly 100-foot long mural that was completed by artist Gillian Fazio late last fall.

"If you go out there right now, you're going to see some piles of debris and dirt. That area could use some improvements," Gulledge told members of the Lake Wales Community Redevelopment Agency (CRA) recently. "There's pretty sparse plantings, and they're not in very good shape. There's a lot of opportunity."

Gulledge, who grew up in Charlotte, NC and has a bachelor's degree in forestry from Warren Wilson College and a master's certificate from the University of Florida, said city leaders have noticed the mural has been garnering plenty of attention since its recent completion.

"We're already having a lot of people getting their picture taken in front of that mural so we see an opportunity to enhance that," Gulledge added. "It's very popular on social media."

The 16-space parking lot – owned by the city – is surrounded by a five-foot wide strip of planting beds. Volunteers did prep work on the site on April 10, and another volunteer day is tentatively scheduled for May 1. Lake Wales Main Street recently launched its "Third Thursday" market at the site as well which features a variety of produce, artisan food vendors, plants, a pinch of crafts and a specialty food truck.

The plan is to plant compact firebush, white and orange milkweeds, ornamental grasses and long blooming perennials, according to Gulledge. The milkweed in particular is a strong attractant for Monarch butterflies, which are also central to the mural, which was a joint project of Lake Wales Main Street, Florida's Natural and The Ellis family.

"That mural is gorgeous, I would like people to take pictures, linger a little longer, make it an attractive place for people to be," he said. "And I like to play off the themes the artist established in her work, such as monarch butterflies. They are in desperate trouble and need our help."

He said the choice of plants would be both visually and environmentally pleasing.

CRA Chairman Robin Gibson confirmed he too has had recent success after planting milkweed near his office window.

"In about two weeks, I had Monarch butterflies. Now they are a magnet for them, they get their nectar out of them," Gibson added.