Affordable Housing Initiative Kicked Off with Groundbreaking May 1 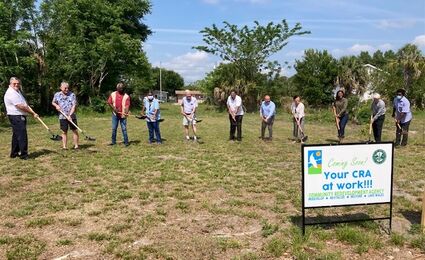 Eleven shovels broke ground Saturday, May 1 to signal the ceremonial start of an affordable housing initiative in the city's northwest community.

"I hope you feel as optimistic as I do about the future of Lake Wales," said Lake Wales City Manager James Slaton. "We are providing hope to families to move into beautiful homes."

The groundbreaking was for the first two homes being built as a partnership of the Keystone Challenge Fund, the city's Community Redevelopment Agency, Polk County Housing and Neighborhood Development, the Green and Gold Foundation and CenterState Bank.

Bagwell said his nonprofit has helped 4,700 families throughout Polk County with affordable homes and has presented homebuyer seminars to more than 25,000. Bagwell praised city officials for their commitment to affordable housing, especially Slaton: "We'd never met with a city manager before and I think he wanted us to get started that afternoon."

The city paid $10,000 to purchase the two lots from the Green and Gold Foundation, which operates the B Street Community Center across the street. The CRA donated the lots to Keystone, which will supplement the $250,000 Polk County put up for construction. CenterState, soon to become SouthState Bank, contributed $60,000 for down payment assistance and to help with closing costs.

"We're proud to do what we do," said bank regional President Paul Gerrard. "Our name may change but our commitment to the communities we serve will not."

After the groundbreaking Bagwell walked some of the attendees north on B Street to show where Keystone plans to build two more new houses and rehabilitate two others so the entire block will have quality homes. 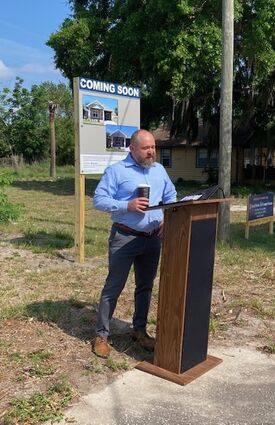 "This is about changing people's lives," Bagwell said.

The first two homes will be valued at about $170,000 each and have mortgage payments of about $878 per month. Keystone officials said income guidelines may limit eligibility for the program to a family of four with an income of no more than $47,000; they estimate a family will need a minimum annual income of $32,000 to afford the mortgage payments.

Keystone and city officials are optimistic construction of the first two houses will spur additional development in the area.

Another groundbreaking ceremony is planned for 9 a.m. Saturday, May 8 for an affordable home at 136 B St. to be built as a partnership between the city's CRA and the Florida Development Corporation.