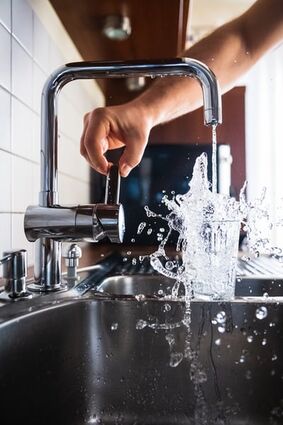 Lake Wales commissioners will be tackling a big issue in the coming months, looking to ensure the city has an adequate supply of water for decades to come.

City leaders recently heard a presentation from representatives of the Polk Regional water Cooperative, which has settled on a plan to drill into the lower Floridan aquifer to provide a new alternative water source for local municipalities.

Those wells will be up to 1,800 feet deep – about three times deeper than wells into the upper Florida aquifer which currently provides the bulk of the city's water – and will tap into brackish water.

PCWR officials said once the well is drilled, transmission pipelines are in place, and additional treatment plants are constructed, the entire project carries a current price tag of approximately $313 million.

The group is ready to move forward with design plans for the project, and is asking the city for $660,000, which would cover 60 percent of the city's expected payment for this initial phase. At that point, the city could use an "off ramp" to get out of the project for whatever reason it wants.

Until recently, Lake Wales was considered a PRWC project participant. But commissioners unanimously agreed at their meeting of April 20 to change the city's status to "project associate" to allow time for it to study the possibility of creating and funding its own alternative water source.

City Manager James Slaton said the city has already hired its own engineering firm to see if it makes more fiscal sense for Lake Wales to develop its own alternative water source in the coming years. City officials said that a draft report could be completed in as soon as 60 days.

Part of the reason for the study is the city's Market Street water treatment plant is largely underutilized at the moment, with the capacity to process more than 80 percent of the water it currently treats. The city operates three treatment plants.

Slaton said it was important for commissioners to have good information to consider both options going forward.

"Our initial thought is we can do it for less money and regain control of our water system in Lake Wales. At some point, you'll have two options to choose from, the city option or the PRWC option," Slaton told commissioners recently. "We want to do some due research here, some due diligence, before making a decision like this. We're investigating it and pursuing it. Our decisions are going to have lasting implications."

The contract to finalize hiring the consulting engineering firm – Hoyle, Tanner and Associates – was approved at the April 20 meeting as well.

"Alternatives for future additional supply may potentially include additional groundwater development, bulk water purchases from the PRWC, increased conservation measures and greater reuse of treated wastewater," the company noted in its proposal. "These alternatives, and perhaps others that may be included,will be defined and assessed in terms of advantages, disadvantages, risk factors and opinions of cost."

The firm may also provide an advisory role in helping decide whether or not the deep well project is right for the city.

PRWC representative Ryan Taylor said the deep well project has been given a high priority after years of discussion and research.

"This is not something that happened overnight. This is something we started and have been working on since 2006. We knew it was coming, we just didn't know what it would look like," Taylor said about finding an alternative water source. "We're at the doorstep now. And we've prepared for it. We've got a permitted project that says we can get water from this location. We're setting that plan for the future of Polk County."

Currently, the city serves just under 27,000 people through the municipal system and the Park water Company which it purchased last year, using about three million gallons of water daily.

Forecasts anticipate the city's water need at 3.7 million gallons a day by 2045, with roughly 4,000 new households on line by that time. County officials said the Southwest Florida water Management District and the state are considering a 30 percent cut in Polk's maximum allocation amount in the next few years.

Should the city ultimately decide to join the PRWC deep well project, the entire cost to Lake Wales over the next 20 years would be just under $10 million. The city could spread those payments out over 40 years, meaning annual payments of approximately $247,000 for the next four decades to have an alternative water source.

Of the $313 million "grand build out" total for the project, half would be paid for by the SWFWMD. The rest would be spread out among all participating municipalities in Polk using a formula based on expected water use.

"They are big numbers. They are scary numbers, but with the water management financing half of it, and our outreach to federal programs that will finance the other half of it, it will spread this out over a period of time. It knocks it into a category that makes it more doable for local member governments. Without that, you'll see how expensive it really is," Taylor said.

He also said that by 2025, SWFWMD would cap total water capacity to the five counties that make up the Central Florida water Imitative at 750 million gallons. Anything used over that number would have to come from an alternative water source.

"Our taxpayers, our utility customers, have paid for this plant already. All that capital has been put out there and it's not being used. We need to explore if its more advantageous for us to use that plant. That's what we're proposing," he said.

Mayor Eugene Fultz, who serves as chairman of the PRWC at present, said going down parallel tracks over the next few months before making a final choice made sense.

"To be an associate means we are still a member of the Polk Regional water Cooperative but we don't put the money out there on those projects right now. It gives us time to finish our exploration before we make any decisions," Fultz said. "If we decide to go back to the Polk Regional water Cooperative we still have that opportunity to do so because we are associates."

Deputy Mayor Robin Gibson said city leaders recognize the need over the next few months to make a decision on how to move forward.

"We've got no option. You can't substitute something for water. We're on this peninsula, and the water problem has to be acknowledged," Gibson said. "We may hear from some of our constituents,' we have plenty of water, just drill.' No. We have to get past that thinking, that's what's brought us to the point we are now."

He added that it might not be a decision that's based solely on the cheaper option.

"All things being equal, control has value," he added. "You can't put a dollar on it. We're going to have to be very knowledgeable about costs and what that control is worth to us. And have a relative value as to what that control is worth to us; we play a little more in cost but have a lot more control. This is serious stuff. I want us to be prepared. I don't want us to be pressed into something that isn't thoroughly researched. Some of this is basically irreversible."