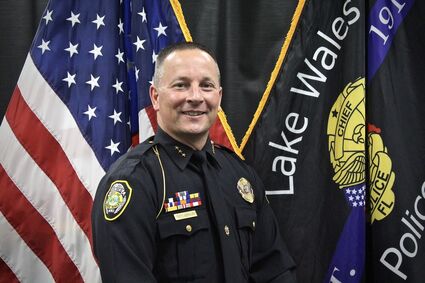 After 27 years with the Lake Wales Police Department, Deputy Chief Troy Schulze is stepping out on faith and making a career change.

May 15 will be his last day on the force, as he leaves for a management position with Chemical Containers, Inc. His role there is still being defined, but Schulze says he is enthusiastic about the new opportunity.

"It's exciting to me. I am very excited, (wife) Kami's excited, but it's difficult too," Schulze said.

Schulze said he expects to shed a few tears, but he won't miss always being on call, missing important family events and having to put on a bulletproof vest every day.

"None of us signed up to get hurt or get shot or be afraid. We didn't sign up to do that. We signed up to make a difference," Schulze said. "We know there's a risk in the job. The majority of the career has been some ups and downs, but right now the challenge is 'What do we do to do it right?' "

Schulze clearly remembers as a fresh-faced but nervous 20-year-old seeing his reflection in the window as he walked into the police department wearing a suit, trying to exude confidence, and thinking about how he just wanted to make a difference in his hometown.

When he hit 25 years' service Schulze started thinking about a career change. Now making a salary of a little over $100,000 a year and three years shy of collecting his full retirement at age 50, he decided it was time to move on. He admits recent attacks on law enforcement nationally are sometimes overwhelming, but he appreciates those who continue to support their local police.

"Every day we come to work, someone pats us on the back, shakes our hand, buys a meal, tells us they love us, they appreciate us, they're praying for us. We've got your back," Schulze said. "I just wish those people would speak up. I wish those people would come forward and say even if someone felt we're not doing it right to not be on the attack, but be part of the solution."

Schulze is leaving behind a 3-inch-thick personnel file filled with training certifications, commendations and superior evaluations documenting his rise from patrol officer through the ranks to the deputy chief position he assumed in 2011.

Schulze said he is departing with some great memories, especially from his two years as a school resource officer building relationships with teenagers, and his five years tracking down bad guys with his canine partners, first Trooper and then Maloch, both German shepherds.

"Find the man," Schulze said he told Trooper, when they responded to an alarm at Huston Cadillac. Trooper found and latched onto a would-be burglar who was attempting to steal cars, but Schulze backed the dog off once the man surrendered and agreed not to stab Trooper with his screwdriver.

Schulze said another positive memory was Trooper quickly tracking a mentally unstable man who had sexually assaulted an ex-girlfriend; that incident ended with an arrest and the dog didn't have to bite the suspect.

"I loved the school resource component, including the SAVE program (Substance Abuse and Violence Education)," said Schulze. "It definitely builds trust, not with every student, but you're there, you're in their lives. You're cheering with them when they are winning and you're with them when they're down."

As deputy chief, Schulze was involved in many of the department's outreach initiatives, like the holiday student Shop with a Cop program and Bobbers with Coppers, where children fished at the lake with police. Schulze last year initiated a new Rallying Point program, where he and other officers would pop up with a canopy tent and chairs at various locations throughout the city and just listen to people and answer their questions.

Because he grew up here and was well known in Lake Wales Schulze said he never was assigned to work vice, prostitution or drug crimes. But he pretty much worked or supervised every other area of the department.

"Police officers have a very unique job," Schulze said. "I don't know that the community at large understands, and sometimes I don't know if they want to. We see the bad in people, victimization behind closed doors. It's a bit overwhelming right now to every time you do something you question what's going to be said about you. But we just encourage our guys to do the right thing, tell the truth, do your best, stay above reproach."

Schulze said with a note on his calendar he reminds himself every day that "Success is not by chance." On a mirror in his office wife Kami wrote him a message: "What do others see?"

Schulze said it's not to remind him to check his appearance, but she's asking "What is your character, Troy? What is your heart? You're serving people. That's what others see."

Calling them "rock stars" Schulze expressed pride in his youth minister wife and both of his children, a daughter who teaches school and a son who became a police officer last year. He said he hopes to stay connected with the police department in some capacity as a volunteer.

"I'm a person of faith. I pray. I just feel like God's told me to just keep doing the right thing." 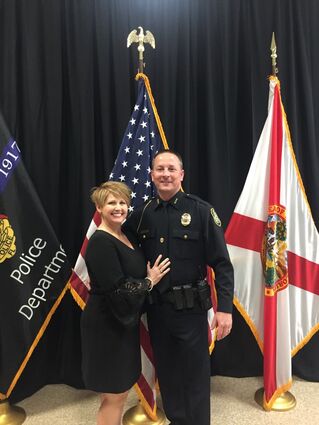 Schulze said the high volume and vocal criticism, especially in the last year, has made being a police officer "a job of impossibilities," but he's still encouraging those who want to serve to enter law enforcement.

"My advice is going to be remember why you're entering. What is it that is drawing you? If it's people who need help, always remember that. Don't get jaded. Don't get caught up in the hype, this forced national news of racism and everything that's about it," Schulze said. "Just remember why you started. Stay the course. You've got to be able to look yourself in the mirror. You've got to be able to sleep at night; and remember that people are people.