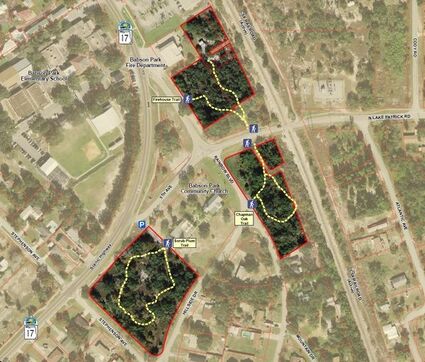 The property, which has previously been protected by a temporary easement, formerly belonged to the Babson Park Community Church.

The Scrub Plum Preserve contains a series of trails that winds through native habitat on the Lake Wales Ridge that has been used for decades for environmental education at nearby Babson Park Elementary School.

The educational efforts were pioneered by the late Virginia McKinley and Helen Morrison and continued in recent years by Sally Morrison, one of Helen Morrison's daughters, and others to provide generations of students with an appreciation of the area's sense of place.

This permanent conservation acquisition was completed through the efforts of Virginia McKinley's sons, Jim, Richard and Bill, Doug and Sally Morrison and through a grant from the Moran Foundation.

The conservation easement means the property, which contains federally listed plant species such as Britton's bear grass and Scrub morning glory, will have permanent protection and will not be threatened by development.

The property lies along the Ridge Scenic Highway, a 39-mile corridor that winds through several communities along the Lake Wales Ridge through a mosaic of native habitat, farmland and developed areas.

The Lake Wales Ridge, which stretches for 150 miles from southern Highlands County to southern Lake County, contains one of the highest concentrations of rare and endangered species in the United States.

Green Horizon Land Trust, which was founded in 1991, has been instrumental in securing the purchase or protection through conservation easements of more than 6,600 acres along the Lake Wales Ridge and elsewhere in central Florida.

Green Horizon Land Trust is willing to work with private landowners to help them to preserve environmentally important parcels in financially beneficial ways.

Green Horizon is also looking for members to support its conservation work.

For more information on the benefits of joining Green Horizon Land Trust and the services it offers to landowners, please go to https://www.greenhorizon.org