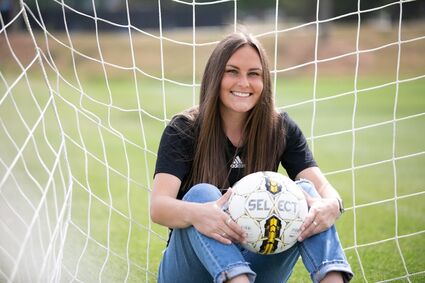 If Macy Sinner's life could be a mathematics equation, it might look something like this: Academic Achiever + Soccer Star = Outstanding!

At Lander University, the graduating senior has had a full roster of activities -- academic A-lister, Lady Bearcats' soccer forward and a math-whiz tutor to her peers. This semester, she even found a new endeavor -- coaching soccer to children at the Greenwood YMCA!

The Lake Wales High School graduate followed her sister Hannah to Lander, where both were recruited to play on the women's soccer team.

The move was a good one. With only a 13-month age difference, Sinner said that she and Hannah weren't always best friends in high school, where they played competitive soccer for the Florida Rush league. But their time at Lander and their closeness as teammates "strengthened our relationship as sisters, and I'm grateful for that."

Sinner will graduate from Lander on May 11 with a double major in Criminology and Sociology and a minor in Homeland Security. After a summer visiting family, she will return to Lander in August to pursue a master's degree in Emergency Management, a program nationally recognized for its academic rigor.

She'll also have a new role at Lander as the Graduate Assistant Academic Coach in the Academic Success Center, where she has been a math tutor for the past three years. When Sinner applied for the job, "I immediately reached out to her and said that she needed to stay in the ASC family," said Anissa Lawrence, Lander's Academic Transfer Coordinator. "She has always been a positive inspiration to the students whom she tutored and her peers."

Lawrence lauded Sinner's abilities to connect with students. "She spearheaded our first drop-in sessions by hosting 'Math with Macy.' Those sessions were a huge success, and she was able to help outside the ASC."

Sinner said the ability to blend college classes with her soccer schedule – combined with her tutoring expertise – has enabled her to help others find their paths to success through time management, organizational skills and planning. "Being able to pass these skills to someone else helped me," she said.

Her personal success story is testament to this. Sinner has been on the President's List six times at Lander and twice on the Dean's List. Her academic achievements earned Gold Level status on the Peach Belt Conference's Presidential Honor Roll. A member of the Alpha Chi National College Honor Society, Sinner was awarded the Walter Lanier Gorham Criminal Justice Scholarship, a Lander academic scholarship and women's soccer scholarship. 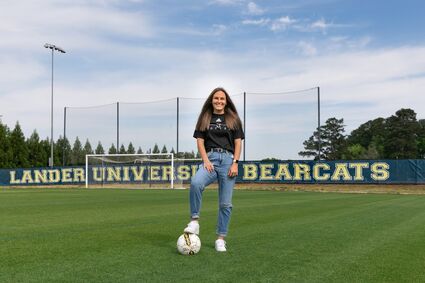 Reflecting on graduation and her upcoming graduate program, Sinner said, "If I had not come to Lander, I probably would have attended an NCAA Division I school in Florida. At a big university like that, I wouldn't have had the same opportunities that I've had here. The culture at Lander is caring and genuine. Everyone wants you to succeed."

ABOUT LANDER UNIVERSITY: Founded in 1872, Lander University is a co-educational, state-assisted, comprehensive, regional, four-year university in Greenwood, S.C. With approximately 3,500 students, Lander provides exceptional educational opportunities within its traditional liberal arts and science programs, and its professional programs in business, education and nursing.