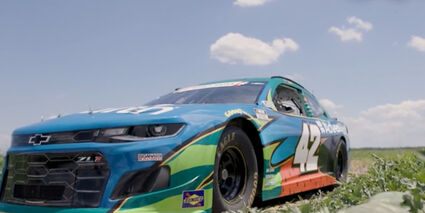 AdventHealth is teaming up with partner Chip Ganassi Racing (CGR) and their NASCAR Cup Series drivers Ross Chastain and Kurt Busch to raise money and awareness for mental health and provide fans with a chance to compete against Chastain and Busch on iRacing, the premier online simulation for motorsports.

With May marking Mental Health Awareness Month and NASCAR's Coca-Cola 600 race just around the corner on May 30, the two drivers are taking some time to Play It Forward and encourage everyone to take stock of their own mental wellbeing.

Funds raised at AdventHealth.com/RaceForMentalHealth will help expand the hospital system's behavioral health services for patients. The COVID-19 pandemic has highlighted the need for access to high-quality mental health care.

"The iRacing event will be a great opportunity to have some fun with our fans while also raising awareness for mental health, which is an issue that can too often be overlooked. It's an opportunity for me to think about my mental health and hopefully others to do the same," Chastain said.

He noted the mental toll NASCAR racing, a sport in which there are far more losers than winners each week, can take on his attitude and mental outlook.

"There's 39 losers every week," he said. "I've lost a lot more than I've ever won, which makes it even more important to keep a positive attitude and always look forward to the next race and how to improve."

That's why time to recharge and connect with fans can be so important.

The iRacing event will be held at 7 p.m. May 26, when viewers can donate to Chastain's or Busch's iRacing stream or start their own fundraising streams.

Fans who enter to iRace against Chastain and Busch will also have the chance to ride shotgun with their name above the No. 42 AdventHealth Chevy passenger door during the Coca-Cola 600 at Charlotte Motor Speedway on May 30.

Those who don't have iRacing can tune in to the livestream on Facebook or Twitch and donate to enhance mental health services at AdventHealth. They can also enter a drawing for a chance to receive two tickets to the Charlotte Roval race on October 10, a virtual meet and greet with Chastain, a piece of the No. 42 AdventHealth Chevy from the Coca-Cola 600, signed swag and more! Go to AdventHealth/RaceForMentalHealth to give today and find more details about the iRacing event.