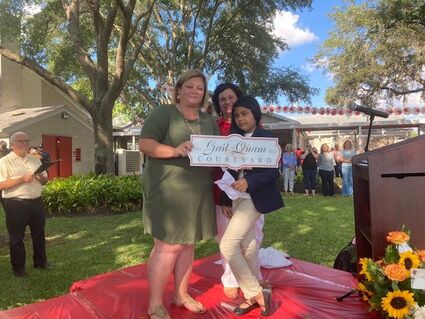 A courtyard packed full of well-wishers gathered May 27 to celebrate the life and leadership legacy of Polk Avenue Elementary Principal Gail Quam, who is retiring after 36 years at "The Avenue."

The event was full of school traditions and glowing accolades for Quam, who started her teaching career there in 1985. Prior to becoming principal in 2007, Quam served as assistant principal, reading facilitator and teacher in exceptional education, kindergarten and grades 1-3.

Quam was asked to ring the courtyard bell to symbolize she had "met her goal" and was ready for her next adventure. She promised she would return for visits because "once a cardinal, always a cardinal."

The school's cardinal mascot posed for pictures and participated with a group singing the school song. Assistant Principal Shay Hixenbaugh joked that when people leave Polk Avenue they are "given the bird," in Quam's case a birdbath with a decorative cardinal. Hixenbaugh also unveiled a sign designating the outdoor garden as the "Gail Quam Courtyard."

Dr. Greg Hall, retired president of Warner Southern College, Quam's alma mater, interviewed some of her 55 faculty and staff members so he could more fully describe her leadership and service. He said talking about Quam's departure brought many to tears as they described her big heart, full of compassion, her prayers and contagious smile.

Hall said Quam's fingerprints would forever be on the school and her legacy would last because of her "pursuit of excellence in every facet of the school. It is in the personal touch, the deep care, the devotion to every student and every family, the earnest interest in the wellbeing of teachers and staff.

"It is in the love and devotion practiced every day in this place. It is in the calmest acts of kindness, for the most part private and never known. It is in the words you spoke of encouragement and support. It is in that warm embrace, the modeling of good behavior and values expected by all. It is the calling to nurture the soul as well as develop the mind."

Representing the school's 540 students was Arturo Barcenas, whose mother Anna will become the school's next principal. He praised Quam for "teaching us to be kind and to help others," for writing encouraging notes on his report cards and for seeing the best in everyone. Fighting back tears, he closed his remarks with: "Thank you, Mrs. Quam, for making Polk Avenue my home away from home."

First grade teacher Chasity Nieves recalled attending Polk Avenue 17 years ago, being in a new place with new people and not knowing the language.

"You motivate, empower, support and inspire me every day," she told Quam. "May you be proud of the work you have accomplished, the person you are and the difference you have made."

Another former student who now teaches second grade at Polk Avenue, Ana Rodriguez, said the school and students' attitudes have changed much under the leadership of Quam, who "pours her heart and soul into the school, into the students and staff every day." She said Quam makes sure they "always feel loved each day."

Andy Oguntola, board chairman for the Lake Wales Area Chamber of Commerce and Economic Development Council, brought Quam the Jerry Miller Service Award, a presentation delayed due to the COVID-19 pandemic.

Hall pointed out that for Quam "it was never a job, it was a calling." He said she applied the "Amanda and Kirby test" to her work: "In any situation, make a decision about a student as if they were your own children, not someone else's."

Quam said she is looking forward to being able to visit daughter Amanda in Tallahassee, and spend more time with new granddaughter, Olive Kennedy Quam, the daughter of son Kirby and his wife Emilie. 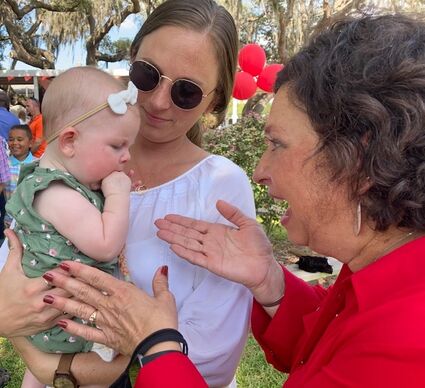 Hall told Quam she wasn't really being retired, just "redeployed," noting "Your best most productive, most influential years are before you, not behind you."

Quam told the crowd that serving at Polk Avenue had been a privilege and an honor. She thanked the many people who contributed to the school's success.

"I firmly believe the Lord puts people in our paths for a reason and each one of you has enriched my life," Quam said, noting they "really helped me grow as a person, a leader, a follower of Jesus, hopefully a model for our students and an educator."

Quam said that while it will be sad to go, "I know that I am leaving Polk Avenue in such great hands. It is such a comforting thought that you all have what's best for our students in mind . . . You will always be in my heart."

Quam Wants to be Remembered for Promoting Culture of Kindness 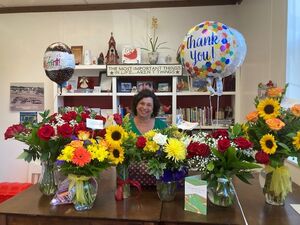 Many flower bouquets were delivered to Quam's office to celebrate retirement.

Gail Quam appreciates all the flowers, cards and kind words as she prepares to retire from her position as principal of Polk Avenue Elementary School. But what she really hopes to be remembered for is promoting a “culture of kindness” during her 36 years at the school.

Some of her favorite memories include times when the entire school would come together for a fun activity, like student-led Friday forums or batting around beach balls while playing music.

Quam is proud of the school’s designation as a Leader in Me Lighthouse School, recognized for implementing a schoolwide process patterned after Steven Covey’s Seven Habits of Highly Effective People. The program develops the leadership skills of all students and staff, transforming school culture and performance.

“I think I’m really, really proud of the well-rounded students our kids have become,” Quam said. “We’ve got a ways to go in proficiency, and we’re working on it. But our students are just great people.”

Quam acknowledges that spending her entire career at one school is unusual, and it made her research what others were doing: “I’ve had to be very diligent about going out and seeing what is out there at different schools because I only have this as my knowledge base. This has been a great place to be.”

Quam praised her administrators and professional colleagues for helping her learn not only how to teach, but how to lead. Quam said she was a teacher who walked down the halls, keeping mostly to herself, but then Principal Al Pido started encouraging her to move into leadership.

“He kept pouring that into me along with a lot of other staff members who’ve just been kind and gracious and willing to take me under their wing and teach me what I needed to know,” Quam said.

Being part of the Lake Wales Charter School system has afforded her a higher level of autonomy as a principal, while also offering new challenges. She said she never envisioned being responsible for a $3 million annual budget and 55 staff members.

“I’m just really proud of the staff. I could not have asked for better people to work with, who love kids, who pour in, who want the best for them. It’s really a great group of people,” Quam said.

Quam said she plans to spend the next six months or so just enjoying retirement and spending time with family, including a new two-month-old granddaughter, Olive. She expects by about January to have some idea about her next adventure: “I’ve been praying about it but the Lord hasn’t opened any doors yet.”

While she will miss the daily interaction with students and school staff, she’s open to possibilities outside education.

“I obviously have mixed emotions about leaving this special place but I’m looking forward to new adventures,” Quam said. “Change is good and Polk Avenue will be left in good hands.”