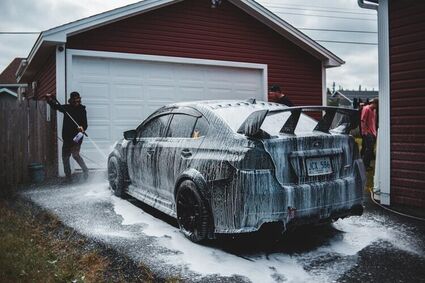 Responding to increased complaints from citizens, Lake Wales City Commissioners agreed they need to put regulations in place on mobile car wash and detailing businesses. But they tabled the first draft of a proposed city ordinance after several business owners expressed concerns.

City Manager James Slaton said city officials were trying to resolve complaints about noise, hours of operation, blocking traffic and fixed locations. He said some were setting up on city streets or rights-of-way and leaving behind trash.

The draft regulations would require the owners to obtain a $75 annual permit for each business vehicle and display their name, phone number and permit number in no smaller than three inch lettering on both sides of the vehicle. They would be allowed to operation only between the hours of 6 a.m. and 9 p.m. and from one location no more than three hours during a 24-hour period.

Larry Bagley, who said he has been operating a mobile car wash business locally for more than 15 years, objected to having to produce written permission of the property owner. He also said since a full detail on one vehicle could take three hours, he shouldn't have to leave and come back another day to clean a second vehicle at the same location.

City Commissioner Terrye Howell said over the years she has received complaints, especially about the noise of generators and loud music being played.

"Some businesses are doing the right thing," Howell said, noting she has problems with people setting up on city streets and obstructing traffic as cars line up for the service. She said the first draft was just an idea to get started on regulations to remedy the problems.

Michelle Threatt, newly appointed president of the Northwest Neighborhood Association, suggested city officials meet with the business owners and explain what problems they are trying to solve.

Slaton took down names and phone numbers and said he would set up meetings to discuss the concerns. Any regulations would be enforced by the police and code enforcement officers, he said.

"The goal is to kind of find a happy medium where people can be entrepreneurs and run their mobile car wash. . .but not be nuisance to neighborhood," Slaton said at a recent workshop.

Wilena Vreeland, who was recognized July 6 as she was stepping down from 10 years' service on the city's Code Enforcement Board, said the city was "not trying to punish someone trying to make a living," but she had seen a mobile car wash setup "snowballing" into a location where people also cut hair and served tacos.

"In no way is the city trying to shut down mobile car washing and detailing," said Mayor Gene Fultz. "We're just trying to get a standard to be enforced."

The city currently has no regulations in place for mobile car washing and detailing businesses. Slaton said he will bring the issue back for further discussion at a future city commission workshop once staff can come up with a workable solution.