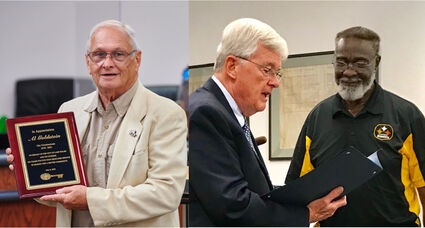 As of July 19 only three people had expressed an interest in filling the temporary vacancy created by the governor's suspension of newly elected City Commissioner Kris Fitzgerald.

Commissioners will discuss potential replacements at their July 20 meeting, so there's still time for other interested applicants to submit a resume and letter of interest. The City Charter gives commissioners 30 days from the July 7 suspension to name a replacement.

At least three of the four remaining commissioners must vote to approve the temporary commissioner, who would serve until either Fitzgerald is reinstated or until a new commissioner is elected by the voters in April 2022 to complete the remaining two years of Fitzgerald's term. If commissioners can't agree July 20 they could revisit or consider other candidates at their Aug. 3 meeting and still meet the charter deadline.

Goldstein has been lobbying heavily for a return to the position, garnering endorsements from numerous public officials and encouraging people to call the commissioners on his behalf.

"I am asking for this interim appointment as I feel I am most qualified to serve in this seat as not only being the previous Commissioner to hold this seat but I have attended all meetings including workshops only missing one since the election and I can hit the ground running without having to go thru almost a year going thru the learning curve of learning city commission procedures etc. I can be an active leader from the start," Goldstein wrote in an email requesting the appointment.

Goldstein was elected without opposition in 2019 after incumbent Commissioner Tonya Stewart failed to qualify to seek re-election due to a shortage of verified petition signatures. In his email he cites his experience serving on various committees and his support for the Dover-Kohl revitalization plan and pending development of about 8,500 new homes.

DeLoach submitted a resume and is expected to attend the July 20 meeting to answer commissioners' questions about why he would like to serve. He owns multiple rental properties throughout the city, is a former semi-pro football player and has been actively involved in youth sports in Lake Wales since 1984. Mayor Eugene Fultz declared June 4, 2019 as Richard DeLoach Appreciation Day, recognizing his more than 35 years' service to the youth of Lake Wales.

According to his resume Loydd started work in child care November 2020 at A Blessed Child Day Care. A 1991 Lake Wales High School graduate, he is a former substitute teacher with past experience in behavioral health who has been involved in youth sports programs for over 20 years.

Two commissioners, Terrye Howell and Daniel Williams, have expressed reluctance to reappoint Goldstein, citing negative public comments he made after his election defeat.

Fitzgerald was arrested June 3 on two felony charges for allegedly taking an 11-year-old boy from his home without permission and threatening him with a loaded handgun. She faces charges of interference with custody of a minor and aggravated assault with a deadly weapon. Details can be found in our original story https://www.lakewalesnews.net/story/2021/06/02/news/new-city-commissioner-arrested-accused-of-using-handgun-to-threaten-child/2316.html