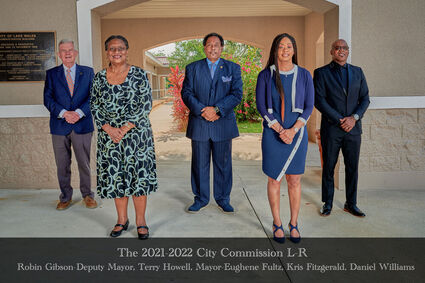 The city charter requires commissioners to vote to select a new commissioner within 30 days of a vacancy. Gov. Ron DeSantis suspended Fitzgerald July 7, little over a month after she was arrested on felony charges.

Interested applicants are asked to submit to City Clerk Jennifer Nanek a resume and letter explaining why they want to serve. They also should plan to attend the meeting to answer questions.

The person chosen to fill the vacancy will serve either until Fitzgerald is reinstated or until a new elected commissioner is seated. If Fitzgerald is still under suspension in February 2022, candidates will be able to qualify to run in the April 5 city election to complete the last two years of her term.

Commissioners must be registered voters who have lived in the city for at least one year. They must live in District 27, which Fitzgerald was elected April 6 to represent. That district includes most of the city north of Mountain Lake Cut-Off Road.

Commissioners are paid about $527 per month. They currently hold regular meetings at 6 p.m. on the first and third Tuesdays of the month. They also hold two agenda review workshop meetings per month the afternoon of the Wednesday before the regular meeting. Depending upon the need, commissioners sometimes call special meetings and meet once monthly serving as the city's Community Redevelopment Agency.

Agendas, minutes and videos of past meetings are available on the city website at http://www.lakewalesfl.gov.

Fitzgerald was arrested June 3 on two felony charges for allegedly taking an 11-year-old boy from his home without permission and threatening him with a loaded handgun. She faces charges of interference with custody of a minor and aggravated assault with a deadly weapon. Details can be found in our original story https://www.lakewalesnews.net/story/2021/06/02/news/new-city-commissioner-arrested-accused-of-using-handgun-to-threaten-child/2316.html

As of July 14 only former Commissioner Al Goldstein had formally applied for the position. He lost the seat to Fitzgerald on April 6 by only 32 votes, and has been conducting an intensive lobbying campaign to be chosen to fill the seat.

If Fitzgerald is found not guilty or is otherwise cleared of the charges she would be awarded back pay and returned to office for the remainder of her term. If her term of office has expired she would receive back pay but not be reinstated, according to the statute.

If she is convicted of either charge, pleads guilty or nolo contendere, the governor would have the power to remove her from the office permanently.