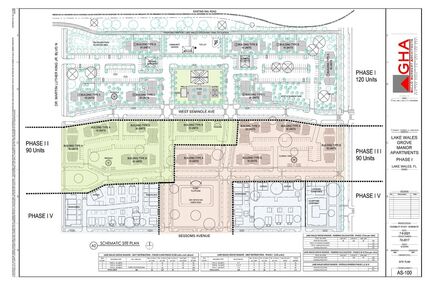 The Lake Wales Community Redevelopment Agency has given its tentative approval to contribute $1 million towards the proposed redevelopment of the Grove Manor housing complex.

Officials from both the city and the Lake Wales Housing Authority have been meeting for a number of months now, largely to ensure the project fits in with the award-winning "Lake Wales Connected" redevelopment plan that includes both the historic downtown business district and northwest neighborhood.

It also included a June 15 joint meeting of the CRA and housing authority boards. City commissioners serve as the CRA board.

After all the discussions, all sides seemed pleased with the outcome of the updated design work at the Grove Manor site, which also got a seal of approval from Victor Dover, the firm's founding principal.

Dover noted that getting the design standards in line with the overall project was important because of Grove Manor's location relative to both the downtown and northwest neighborhood.

"Right in the center of that map is Grove Manor. We made the point in 'Lake Wales Connected' that because the theme of the project was the northwest neighborhood and the downtown are all in this together, the core of Lake Wales can't omit paying attention to Grove Manor and its future redevelopment," he noted.

He said Grove Manor was a central piece in his firm's plan right from the start.

"We included a couple of pages of sketches for Grove Manor. This illustrated just one fundamental ide, which is shifting it as it's redeveloped from a campus style of public housing project to a mixed income, mixed housing, street oriented type neighborhood," Dover added. "In other words, reconnecting it to the neighborhood by extending the street system into it and introducing into it a variety of housing types that one might expect to find in a mixed income urban neighborhood, including apartment buildings. "

He also said he was impressed with the efforts and lengths all sides had gone to in reaching a final plan that worked for everyone.

"I think we're in really good shape. I have to tell you, I am pleasantly shocked that we've come this far," Dover added. "There's been an amazing degree of compromise on the part of the housing authority and their developers in light of your admonitions to them that the design is important to you. They listened. They cooperated. It's impressive and I couldn't be happier about it."

Brian Herbert, an architect from Smith & Henzy working with the housing authority on the plans, added his blessing as well.

"We welcomed the ideas and challenges that were given to us in coming up with this site plan, and we're likewise very happy and pleased with this plan the way it turned out," Herbert said. "We took to heart some of the comments that were made. What we did is we took to heart the idea of breaking this down into a more neighborhood configuration."

The project would cover four phases, the first of which would include 120 units on the north side of the current Grove Manor site. The plan also now calls for a new phase four on land that will eventually be freed up by the redevelopment, to be used for single family housing. The land would be conveyed back to the CRA at some point in the future for its $1 million contribution.

The money is also expected to significantly improve the chances the project will receive low-interest tax-credit financing from Florida's State Apartment Incentive Loan program, officials indicated, which would allow Phase One to move forward. Officials said they should know by the end of the year if their application for the special funding program is approved.

Phase One will consist of garden-style residential apartment buildings. The development will be comprised of 120 family-sized (one, two, and three bedroom,), affordable housing units. All of these units will be set aside for low-income residents at between 30 and 80 percent of the area's median income. Developers estimate the total cost for Phase 1 redevelopment at around $28 million.

Phase One will be built to market rate standards with high quality features and finishes, such as solid surface flooring throughout the units, stone countertops, energy efficient appliances and bathroom fixtures, high quality window coverings, ample parking, and pristine landscaping, according to the developer. Grove Manor will also obtain green building certification and the community will include a central laundry facility, and a multipurpose community room for resident programs and activities such as employment assistance, financial assistance, and adult literacy training.

"Grove Manor is the keystone to the Connector. It's just so vitally important. And this does it. This is leaps and bounds above where we were a year and a half ago. It's very gratifying," noted CRA Chairman Robin Gibson. "We had a wonderful meeting of the two boards. To my knowledge that's the first time that's happened, and we need to keep pulling together."

Mayor Eugene Fultz also said he was gratified by all the effort put in by all sides.

"Seeing what you've done, and coming up with a feasible plan, and ensuring we have quality all the way through, you've come up with a great plan," he said.

The CRA board will still have to decide exactly where the $1 million will come from, but has several options, according to city officials.

They are exploring whether or not part of the $7 million the city is receiving under the federal American Recovery Act can be earmarked for Grove Manor. If not, the CRA still has nearly $1 million it received from the sale of the former Longleaf Business Park several years ago that remains unspent, or it could fund its share out of the revenue the CRA already generates, which currently is about $2.4 million annually. That number will go up as more new and redevelopment projects come on line in the coming years within the CRA boundaries.

The final contribution will be based upon the project continuing to be in "substantial compliance" with the new plan, and a negotiated development agreement for Phase Four upon notification of receipt of the tax credits, city officials added.