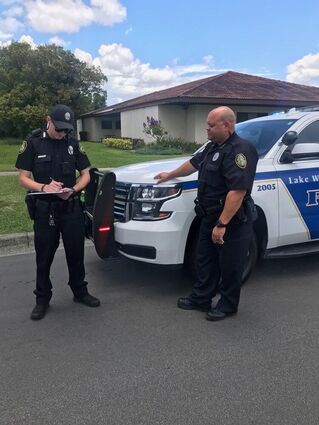 It was a "bumpy start" as Lake Wales rolled out one-fourth of their new police worn body cameras Monday, July 26.

Police Chief Chris Velasquez said the department will use the experiences of the first eight officers wearing the cameras to make sure the program is running smoothly when fully implemented in two or three months.

"It's going to be a matter of working through, seeing how they work with us and how we can work also with all the other partners," Velasquez said.

Since Lake Wales is the first department in Polk County to implement a police worn body camera program, a key partner will be the State Attorney's Office, which will need to access videos to assist in prosecutions. Within the 10th Judicial Circuit only Lake Placid police in are using body cameras.

Velasquez said one police camera on Monday caught the spoils of a burglary on video, leading to the suspect confessing to the crime.

City commissioners in February approved only an 8-camera pilot, but then decided in May to purchase 32 cameras to eventually be worn by all officers who interact with the public. City Manager James Slaton said the $110,350 for the first year implementation was available without dipping into the city's reserve funds. The city committed to a five-year contract with market leader Axon, which includes the cameras, docking equipment, software, licensing and storage.

Velasquez said supervisors helped choose who first would wear the cameras, identifying two officers from each squad who experience the most activity.

Velasquez said although the idea of body cameras meets with some law enforcement resistance when viewed as a tool to catch bad officers, so far Lake Wales police are embracing them.

"The officers are looking forward to it," Velasquez said, noting it's especially important to implement the program properly because "a lot of people are watching."

Supervising the body camera program is Sgt. Alvin Maultsby, the department's training officer. All supervisors and administrators have been trained, but there's still work to be done to ensure videos properly transfer to cloud storage and can be retrieved and redacted of confidential information prior to their release as a public record. Suspects and their attorneys will need access as part of the discovery process in preparing their cases.

Velasquez said keeping up with the latest technology offers a challenge. Ultimately he would like the cameras to turn on automatically when an officer turns on lights and sirens, exits the car or pulls out a weapon or taser. Until the department catches up with new technology part of the responsibility will be on the officer to activate the cameras.

City Commissioner Terrye Howell has stressed the importance of having procedures in place to ensure officers activate the cameras or face disciplinary action.

Velasquez said he would roll out the full implementation once he feels comfortable that any issues have been resolved, which could take two to three months.