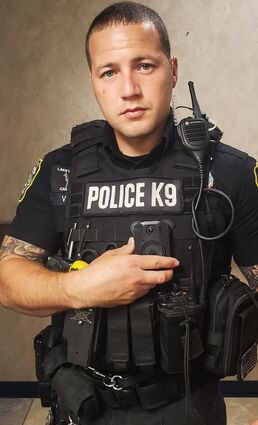 Members of the Lake Wales Police Department have been pleased with the roll out of eight body-worn cameras already in use, with an additional 24 cameras to come on line later this fall.

Deputy Chief David Black said officers who are currently using the cameras are providing constructive feedback and reacting positively to having them available.

"The guys seem to love the body worn cameras. They're excited to have them. We've already had a couple of criminal cases with them. I think they'll prove their value more than anyone ever thought when it comes to stuff like that," Black said. "Now we'll have that second silent eyewitness there that shows what's happened."

The first eight cameras went live earlier this summer, with the rest of them expected to be fully in place this fall. Training has included a large amount of field time with representatives from Axon, the company that has supplied the cameras and software to go live with the system, as well as additional classroom and field training from LWPD Training Officer Sgt. Alvin Maultsby.

"They actually took them out and did scenarios with them, let them get used to pushing the buttons to turn the cameras off and on, the recordings off and on, and we continued that training until we went live," Black said. "You try to create almost a muscle memory."

Putting just a small percentage of the cameras in use right away allows the department to work out whatever bumps in the process they might encounter.

"We just want to make sure we're doing our very best before we get those other ones out, and that we're doing it the right way," Black said. "When we push out the rest of the cameras, we'll do it all at one time. At that point, we'll have two guys on each shift that are very used to them and can help that learning curve."

The cameras automatically come on when the officer's weapon is removed from its holster, or when they turn on their vehicles emergency response lights and siren.

Because of the sheer volume of video that would be created and stored if all cameras operated and recorded at all times would be unmanageable, officers still must activate their devices to record video in most cases.

The camera is actually capturing footage constantly, Black explained but it is not necessarily recorded. When the record function is activated, the system goes back in time to record what was on the video prior to the activation.

"The body camera when it is on but not recording is constantly capturing the last 30 seconds," Black noted. "But there's no audio until you physically turn the button on."

With a total of 32 cameras once fully operational, the system will ensure every patrol officer is equipped with the cameras on all shifts, Black added. Lake Wales will be the first city in Polk County to fully outfit its department with body cameras, although several others are presently considering the option. See Less