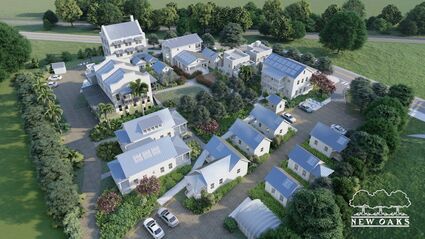 A time lapse depiction of construction phases for the new "pocket neighborhood."

Twenty-four young oaks planted this week along South Scenic Highway in Lake Wales mark the first step in the development of a new "pocket neighborhood," being created by noted urban planner Victor Dover and his wife, architect Maricé Chael. The innovative infill project will occupy a long-vacant parcel lying between the Grove Motel and the SR 60 overpass.

The development will be built over several years in "micro-phases" beginning with "phase zero," Dover told LakeWalesNews.net. At build-out the site could host as many as 23 primary dwelling units and eight "art studio cottages" which could be used as dwellings, "glamping" facilities, or to host visitors. An animated GIF of construction development is viewable here.

Among early construction plans will be a two-story, four-unit apartment building. A final phase calls for a three-story structure at the north end of the site. Elsewhere on the site will be a mix of row houses and garden "art cottages" and an "indoor-outdoor classroom space," Dover said. The project will center around a courtyard shaded by eight live oaks and an adjacent open lawn.

Dover is the lead partner in the noted urban planning firm of Dover, Kohl and Partners which has created the award-winning "Lake Wales Connected" plan currently being implemented in the city. Construction is slated to begin shortly on a redesigned Park Avenue and the Marketplace plaza. That will be followed by extensive reconstruction of First Street, which is still undergoing a final design phase.

In the case of the new "pocket neighborhood," Dover is making a personal investment in Lake Wales. A long-time resident of Coral Gables, he has been enamored by Lake Wales for many years and has great faith in the future of the community. The project received the approval of the Planning and Zoning board at a meeting Tuesday evening.

Dover's creative urban designs have helped to transform numerous city centers and decaying industrial sites into hip and trendy neighborhoods. His plans focus on sustainability and include such features as substantial tree canopy, water-absorbing driveways, and energy-efficient structure designs.

The pocket development lies outside the boundaries of the Lake Wales Community Redevelopment Agency (CRA) and was not considered in the Connected plan, but Dover saw the opportunity to make a personal contribution to the future of the community. Dover's investment firm, Essential Places LLC, acquired the property in January of 2020. According to Dover it had been slated to become mini-storage warehouses. "We thwarted that," he said proudly.

Infill development is sought within the Lake Wales Comprehensive Plan as an alternative to urban sprawl, in which large parcels of land are developed outside of city service boundaries. With housing demand and costs spiking in recent months, many families are finding their budgets stretched to the breaking point. City Planning and Zoning Board members had several questions of Dover at Tuesday evening's meeting, including issues of parking, setbacks, and building heights. Minor variances were granted approval on all three. The recommendation now goes to the City Commission for final approval.

The CRA is promoting infill development in existing neighborhoods elsewhere within the city by partnering with private not-for-profit builders to construct affordable new homes on vacant lots throughout the city.