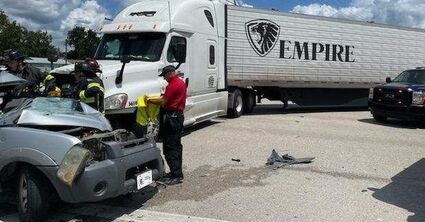 A fatal crash between a light pickup truck and a Freightliner resulted in an afternoon-long blockage of US 27 in Lake Wales Saturday.

Edwin McMillan, 62, of Lake Wales was southbound on US 27 at 1:15 pm when his Nissan Frontier collided with the left turning truck driven by Sterling Robles of Fresno, California, who was uninjured. The crash occurred at the intersection of Washington Avenue, which has signalized left-turn lanes. If remained unclear which driver had the right-of-way, and police are seeking witnesses.

McMillan was airlifted to Lakeland Regional Health but succumbed to his injuries a short time later.

The Highway closure caused a huge traffic snarl in the city, with traffic diverted to Scenic Highway via Mountain Lake Road. The road was cleared and traffic restored about 6:00 pm.