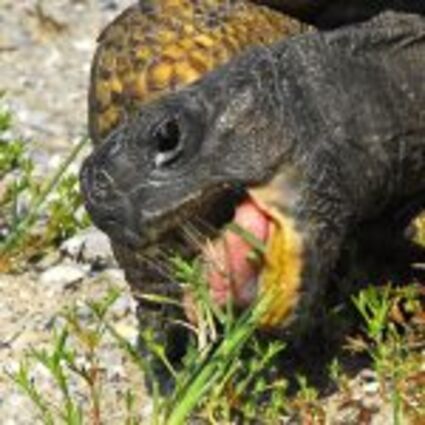 Say what you will about Florida (and many of you have), but we’ve sure got some unusual crimes here. A surprising number of them involve reptiles.

You have probably heard about the guy who, in 2016, tossed an alligator through a Wendy’s drive-thru window in Royal Palm Beach. Last year, Sanford police recovered a five-foot pet iguana named “Smog” that had been kidnapped (lizard-napped?) from a smoke shop.

Earlier this year, someone stole 13 Argentine tegus from a reptile breeding facility in Punta Gorda, and so far the owner has tracked down six of them, a feat of amateur detective work that I think rivals anything Jessica Fletcher pulled off in “Murder, She Wrote.”

But the reptile crime I heard about this past week was not one I have ever seen prosecuted before.

As for the name of the defendant, it’s not a person. It’s a company called Pulte Homes.

Pulte Homes is no fly-by-night outfit staffed by Cletus the Slack-Jawed Yokel and his 1972 John Deere backhoe. This is a nationally recognized corporate entity based in Michigan with branches that stretch from Massachusetts to California.

The company boasts on its website, “Over 70 years of experience go into the building of every Pulte home, and our construction standards are set high to meet expectations.”

Yet those “high” construction standards were low enough that the company wound up facing 22 criminal charges. Twenty-two is a lot. A prosecutor told me that that’s enough to eliminate the possibility of it being an accident.

The victims were particularly vulnerable, too. Gopher tortoises are classified as a threatened species in Florida. Their burrows provide a home for more than just those homely helmets-with-feet. They offer a refuge for 300 additional species, some of which are endangered.

I asked Jeff Goessling, an Eckerd College biology professor who co-chairs the Gopher Tortoise Council, how many gophers might have been using those 22 burrows. Between 10 and 30, he said.

Killing off so many tortoises at once seemed like a throwback to the days when builders would prepare a construction site with a tactic a veteran biologist told me about called “rub the scrub.” Heavy equipment would obliterate any evidence of tortoises, burrowing owls, or any other ecologically important critter that had ever lived on a piece of property slated for development, so they wouldn’t have to slow down for any permits.

I have tried repeatedly to get someone from Pulte to answer my questions about this case, but to no avail. I guess they don’t want to talk about it — it’s too embarrassing for them, poor dears.

Court records show Pulte initially pleaded innocent to all 22 misdemeanors, but then on Aug. 25 pleaded guilty to every single one of them.

“Oh, gee, I guess they’re going out of business now,” St. Petersburg gopher tortoise biologist George Heinrich said sarcastically when I told him about the case. “That’s a joke. Those guys have that much money in their petty cash drawer.”

Still, I was surprised Pulte Homes would commit such a crime — not because of their high standards, but because they got caught doing something similar a year ago.

The first time Pulte got caught

Pulte Homes had a contract to buy 44 acres of undeveloped, wooded land in northern Pinellas County, the state’s most densely populated county. Finding a chunk of undeveloped land that size in Pinellas is as rare as finding a product in Publix in October that’s not flavored with pumpkin spice.

Pulte’s contractor “drove a bulldozer near threatened gopher tortoise burrows,” the Tampa Bay Times reported. The Florida Fish and Wildlife Conservation Commission issued Pulte Homes and its contractor “warnings for the violation … and ordered work on the land to stop for 28 days.”

A Pulte vice president named Scott Himelhoch told the wildlife commission’s investigator that the contractor had been hired to “clear a path into the property to allow access for a truck to conduct soil testing,” not to kill tortoises.

Himelhoch said he had no idea — none! — that there were any gopher tortoises on that sandy, well-drained forest property. But an environmental consultant the company had hired to survey the property had unfortunately marked some of the burrows with orange tape, making them pretty hard to miss.

After the bad publicity and 28-day stop-work order, Pulte Homes’ deal to buy the property somehow fell through. Oh darn!

Pinellas County, Dunedin, and a combination of private donors and non-profit groups scrambled around and raised the money to buy it for preservation. No other developer will ever get a crack at those tortoise burrows.

The second time Pulte got caught happened in April. Once again, a bulldozer working for Pulte got too close to a tortoise burrow — and then apparently drove right over it and 21 more in the Stone Creek subdivision.

Shortly thereafter, Pulte’s own environmental consultant, a company called Kimley-Horn, phoned a wildlife commission gopher tortoise biologist to report the burrow destruction. All the burrow openings had been filled with dirt, all the trees ripped out by the roots, and at least two tortoise carcasses were left behind. One of them had been brutally chopped in two.

A wildlife commission investigator named Aubrey Ransom checked out the tip, documented the destruction, and interviewed the supervisor at the site, Michael Piendel. Ransom subpoenaed all of Kimley-Horn’s records, which included an email trail between Kimley-Horn and Pulte officials about the site.

What to do next required a decision by the state attorney’s office in Ocala.

I spent 30 minutes on the phone this week discussing this case with Chief Assistant State Attorney Walter Forgie, who oversaw Pulte’s prosecution. He said the last time his office had charged a builder with this particular crime was more than a dozen years ago.

Although prosecutors could have charged Piendel with destroying those 22 burrows, he told me, “we ultimately chose to prosecute the corporation because we wanted them to be held accountable. They’re the ones profiting off this.”

The Pinellas County incident helped persuade them to go after the company rather than its employee, he said. And that earlier case ensured the prosecutors would seek the maximum penalty allowed by law (such as it is).

Pulte did have an old, but still valid, wildlife commission permit to smother gophers (more on that in a minute), but that permit didn’t cover this particular section of the property. Pulte officials said the crew had just gotten mixed up about what was what. The emails between Pulte and Kimley-Horn showed that excuse was as flimsy as the fabric in some celebrities’ see-through dresses at the Met Gala.

Pulte officials couldn’t claim ignorance about the presence of the tortoise burrows for the same reason that excuse didn’t fly in Pinellas. Among the evidence found at the scene: Two flags labeled “GT,” indicating the location of gopher tortoise burrows marked by Kimley-Horn.

I asked Forgie if he thought the $13,700 fine would be enough to deter Pulte from pulling the same stunt a third time.

“I hope so, but only time will tell,” he said after some hesitation. “I certainly hope it sends a message that they’re going to be held accountable.”

I asked Goessling the same question. He predicted homebuilders like Pulte won’t be deterred from doing it over and over.

“The fine of a few thousand dollars won’t outweigh the sale of a couple of million-dollar homes,” he said.

When the charges were filed, Pulte made an unusual choice for its defense attorney.

Instead of picking someone with experience handling criminal cases, it hired Ken Wright, a Winter Haven land-use attorney who also happens to be a former chairman of the state wildlife commission. Maybe the next time I get a speeding ticket, I’ll hire the former head of the Florida Highway Patrol to challenge it.

Wright’s environmental track record is — oh, let’s be kind and call it “diverse.” On the one hand, while chairing the wildlife commission, he helped protect manatees from the boating industry and waterfront developers who wanted to take them off the state endangered list.

On the other hand, he served as general counsel for the Orlando-Sanford Airport Authority, which outraged environmental groups by destroying three bald eagle nests. He served in a similar capacity for the Orlando Expressway Authority, which faced a public uproar over its plans to bury more than 400 gopher tortoises during highway construction. Ultimately, that agency backed down and relocated the tortoises. (Wright declined repeated requests for comment.)

The expressway authority held a valid permit from the wildlife commission to bury those gophers, just as Pulte had a valid permit to suffocate gophers on another part of its Stone Creek property.

For 16 years, the wildlife commission handed out permits for burrow destruction to developers willing to write a check into a fund for buying tortoise habitat. By the time the “pay-to-pave” program ended in 2007, after biologists reported that the tortoise population had gone into a nose-dive, the state had handed out 94,000 such permits with no expiration date.

Now, as I wrote in a column last year, “the state’s rules say any developer who wants to build on land occupied by gopher tortoises is required to hire someone to track down every burrow and move the tortoises somewhere else before they can clear the land. According to Melissa Tucker, deputy director of the wildlife commission’s habitat and species protection division, the state has so far issued 1,600 permits to relocate about 60,000 tortoises in the past decade.”

But earlier this year, the Orlando Sentinel reported that this more humane gopher tortoise mitigation system had also become an unmitigated disaster.

The move-’em-out rule “has spawned an industry of for-profit refuges, consultants, and agents who capture and transport the animals, all fueled by tens of millions of dollars in developer payments,” the Sentinel reported. “From inspections of refuges late last year and last month, wildlife commission officials are alleging that they learned of mass deaths of tortoises and extensive evidence of improper care.”

The state’s investigation of the removal permit system has thrown everything into an uproar just as the state’s development industry is pushing to build more homes and strip shopping centers and storage warehouses on tortoise habitat, Goessling said.

Some people regard this as a catastrophe. I contend it’s a prime opportunity for reform.

When the Legislature next convenes, I propose they pass a bill that would offer tortoise-killing builders like Pulte Homes a choice when they get caught.

We can call it the “Let’s Make a Deal” bill. I picture a judge gazing down at quivering Pulte executives and telling them, in Wayne Brady’s voice, “Thanks for pleading guilty — now it’s time to PICK! YOUR! PENALTY!”

Option A: The company pays a fine of $1 million for each tortoise burrow destroyed. That per-burrow amount doubles if the number of burrows destroyed totals more than 10. Thus, in the Pulte Homes case in Ocala, instead of $13,700, Pulte would have faced a penalty of $44 million. Now THAT is how you send a message. 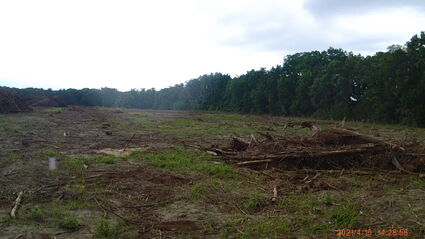 Option B: The guilty party pays the current maximum of $500 per tortoise burrow — but anything that the company builds on that piece of property has to prominently display a permanent, easily readable plaque that says, “This building was constructed by slaughtering an imperiled species that was valuable to the ecosystem.”

To let the tortoise-protection law remain as lax as it is now would be, I think, a real crime — and not one of those funny ones that we like to laugh about.

Editor's note: Craig Pittman has covered new of Florida's wacky, strange and destructive habits for many years. We are honored to be able to include his stories on this site. You may follow Craig on Twitter @craigtimes.