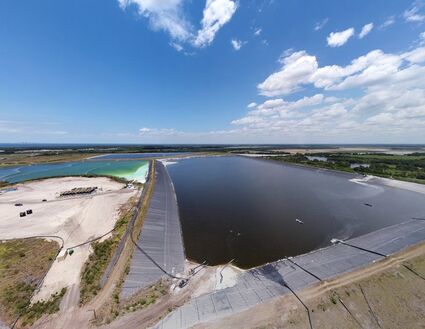 Piney Point Gypsum stack failed in March, 2021, dumping more than 200 million gallons of polluted water into Tampa Bay. The massive summer outbreak of Red Tide in Tampa Bay and on Florida's Gulf Coast has not been directly tied to the failure.

The plan proposed by Manatee County to treat the estimated 270 million gallons of polluted wastewater from the Piney Point gypsum stack ponds and inject it deep underground has been controversial.

Deep well injection has been used extensively in Florida as an alternative to surface discharges. The best example locally is a well near Mulberry that is used to dispose of acidic wastes that were previously discharged, causing concrete bridge supports downstream to begin dissolving in addition to the environmental damage it caused.

Proponents of deep-well injection maintain that the wells are constructed in a way that prevents the hazardous waste from escaping and polluting drinking water supplies.

But a 2012 report from ProPublica documented numerous cases involving leaks from these wells that allowed wastes to reach shallower sections of the aquifer.

This is becoming more relevant as utilities explore exploiting so-called alternative water supplies in deeper sections of the aquifer, closer to the destination of these deep-well injection projects.

Those deeper sections contain, water that are known to be contaminated by brackish water, which requires reverse osmosis to bring it to drinking water standards.

That process also involves disposing of the wastes from that process via the same deep-well injection process proposed for the Piney Point wastes.

Although the Florida Department of Environmental Protection's regular updates on the Piney Point situation focuses on treating the wastewater to reduce concentrations of phosphorous and nitrogen, which are the target for surface water discharges, critics of the deep-well injection proposal focus on the other pollutants in the pond water that the FDEP press releases do not mention. Those pollutants consist of cancer-causing metallic and radioactive elements such as arsenic, cadmium, radium and thorium.

These and other issues are expected to be addressed if a coalition of environmental groups follow through with an announced plan to file a lawsuit to challenge the deep-well injection proposal.

Editor's note: The City of Lake Wales is associated with, but not enrolled in, a Southwest Florida Water Management District pilot program that would draw brackish water from the lower Floridan aquifer for drinking water purposes. The proposed injection well would dispose of the toxic waste of phosphate mining in that same aquifer.