Project Will Be His Fifth in the Historic District 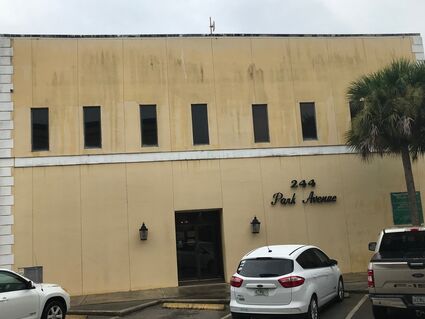 The 1915 building at 244 East Park will soon see a it's original historic face unmasked from beneath a layer of blank stucco.

As the city prepares to embark on a transformative Lake Wales Connected redesign of the historic Park Avenue that forms the heart of downtown Lake Wales, one city commissioner is making his own effort to support the makeover. The blank stucco wall at 244 East Park will be replaced by the original broad windows open to the street, thanks to a substantial personal investment by Robin Gibson.

"I've driven by that building many times" Gibson said of the two-story structure at 244 East Park Avenue. "First I thought, 'that could be fixed,' Then I went by and thought 'someone should fix that, and I know how.' Then I finally said 'I'm just going to do it myself."

Asked why he keeps investing in saving the history of the city, Gibson observed that he's had "a very successful law practice," adding "I never bought a race horse."

The building was the subject of comment in the award-winning Connected plan developed by a team of urban planners led by Victor Dover of Dover Kohl and Partners. Dover pointed it out as an example of a structure that detracts from the appeal of a street and discourages shoppers and visitors.

Gibson described his frustration about "what isn't being done to fix the building, and called the comments from Dover "inspirational."

"The most crucial detail in creating a place where people love to be," Victor Dover told the LakeWalesNews.Net, "is the building-to-street relationship. It's not complicated. Folks love walking by warmly-lit storefronts and seeing other people, but they hate walking by blank walls and through lonely, empty spaces."

The restoration project has already inspired the first of what promises to be a series of short films documenting the process by noted film-maker Paul O'Neill.

Gibson retired from an active law practice that previously saw him renovate or restore four other buildings in downtown Lake Wales, but this time he has no intention of occupying the building himself. Gibson previously restored the original Ellis Drug Store on Stuart Avenue for law offices before moving across the street where he and then-partner Kent Lilly added an attractive balcony as part of the renovation. He then funded the restoration of what he calls "my favorite building," the former Scenic Theatre, before moving into the 1919 Bullard Building, all on Stuart Avenue.

The building previously housed office operations for Joseph Land, Inc. in the 1970's and 80's and Ramsgate Insurance since 1990. The stucco wall preceded both of those owners.

Gibson purchased the 10,800 square foot structure for $400,000 in August and has already conducted "destructive testing" of the façade, revealing a portion of the original brickwork. The building once sported a classic, ornate parapet and brick trim, but the entire design was converted to a blank wall with only a row of narrow second-story windows and the door to break the monotony. Gibson described the building as the "undistinguished stepsister" of the striking Lake Wales State Bank building next door.

"Part of the problem is that the brick we uncovered is soft," Gibson said, adding that it was an unattractive gray-brown color.

A short film by Paul O'Neill tells the story of the building and the visionary who plans to restore it,

"We have a two-step process ahead of us," he said, "involving lots of scaffolding, removing all the current stucco board and revealing the original surface. Then we'll have to decide whether to try to salvage the brick or simply remove it." If removed it will be replaced with new brick mimicking the historic design. Gibson has retained General Contractor John Olson to perform the work, which will begin soon.

The masonry structure was built in 1915 and once housed Sellers Department Store, according to a seminal book by the late Janyce Ahl, a local historian. The building originally hosted the Masonic Lodge upstairs, and it was there that a group of fifty citizens gathered on April 17, 1917 and agreed to petition the state for a municipal charter. It was issued later that year, giving birth to the City of Lake Wales.