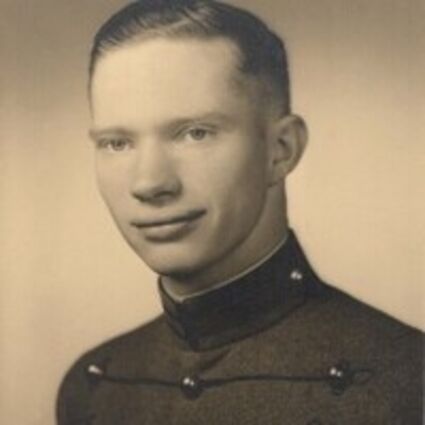 2:20pm at Advent Health in Davenport, Florida from respiratory complications due to Covid 19.

Oz was born on October 19, 1937 in Lake Wales Florida. Oz spent his formative years on his

father's dairy farm. He would often speak of these times with great fondness of the cowboys and hard

lifestyles of the post-Great Depression period in Central Florida that he witnessed firsthand. During this

His mother, Francis Louise Martin and father, Lapsley Roger Caldwell Sr. divorced when he and

his younger brother, Roger, were still young. Oz and his brother spent the latter half of their childhood

with their mother in Tampa, Florida. Understanding how hard his parents worked and sympathizing for

his mother as a single parent, Oz grew up with a keen understanding of responsibility and duty. His

Point (Class 1920), but was drafted into the war (WWI) before finishing, deeply impressed Oz's opinion of

duty and influenced his attitude towards serving one's country.

Oz graduated from Jefferson High School in the class of 1956. During High School he served

receive an appointment to the United States Military Academy, West Point, where he completed a

Bachelor of Science in1960 and was commissioned a lieutenant in the US Army. After commissioning he

Afterwards he served two terms in Vietnam, served as a Company Commander in the 505

1978, while presiding over his law school fraternity Phi Delta Kappa.

Oz lived quite an active and accomplished life. He was a retired Vietnam veteran, later working

defender from the Bartow courthouse. Here, he cultivated friendships with colleagues and

acquaintances alike that would last throughout his life. He would regularly attend West Point Alumni

ones. He was a very active member of the local community, active with the Lake Wales Moose Lodge

and even served as the commander of the Lake Wales VFW for several years. Oz often joked that being

a public defender stripped him of whatever humility he had left, but contrary to his remark, Oz was a very

kind and generous person that really tried to see the good side of people.

back to people that needed help. Of his many great accomplishments, one he was most proud of was

sponsoring and helping establish a new home in the US for a Vietnamese family of seven. Beyond that,

he was a mentor to many, a good neighbor, a good friend, a brother and a father. He had a very

charitable nature, helping many people with things like campaigning, getting their driver's license, and in

some cases to buy a car. One of his most impactful and long-standing generous acts was to sponsor

one of his promising landscapers through college. This show of faith and personal mentoring resulted in

the student earning their Master's degree in Architecture from an Ivy League school. One of the

countless lives, Oz's generosity has altered for the better. He really loved his dog Loophole, who got her

name from a joke he made for a lawyer's best friend. Oz was known for his quirky sayings, stories, and

old songs he would often recite. He will be missed very much.

Oz is survived by his daughter Wilella Nelson of Savanna, GA and brother Lapsley Roger

Academy and condolences may be sent to the family at http://www.Marionnelsonfuneralhome.com.