At Age 97, A Home Rehab is An Unexpected Blessing 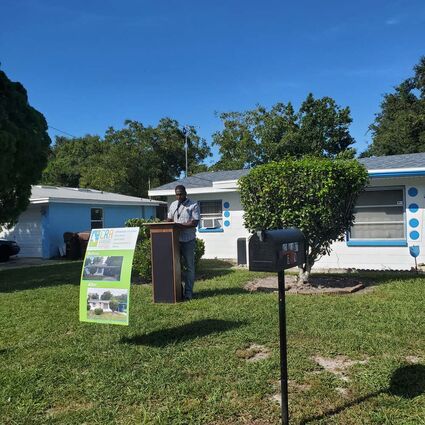 Ardella Green has been a resident of Lake Wales since 1942 and at 97 years old, she has gotten to the point in life that climbing up to fix the roof of her aging home on Alabama Street was no longer an option. Thanks to a grant from the Lake Wales Community Redevelopment Agency, that is no longer a challenge she must contemplate.

Hers was one of several aging homesteads in the city that have been repaired thanks to a $68.000 fund established by the CRA board.

Referred to the program by the Lake Wales Care Center, the home received a new roof, had the exterior repainted, and the soffit and fascia replaced.

In addition to those repairs, Mrs. Green watched gratefully as volunteers from the Lake Wales Police Department helped clear out her yard. Students from Roosevelt Academy also participated in the effort, placing a planter in her yard that now sports a mini-vegetable garden..

Mrs. Green also spoke and thanked everyone involved in this effort. She has reportedly been a homemaker and seamstress throughout her life. She enjoys crafts and frequently crochets hats for patients at the Cancer Center. According to her niece Barbara Joiner she has helped raise many kids in Lake Wales. She has been involved in Mt. Zion Progressive Baptist Church.