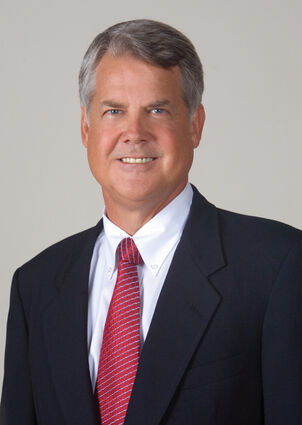 By now a familiar voice to fans at Friday night football games, one local volunteer has made a highly successful career out of childhood inspiration, and a thread of football tradition runs through it. Local son Kent Lilly has become something of a legend in his own right.

Lilly grew up in Lake Wales, and after Lake Wales High School went on to graduate from the University of Florida with a degree in accounting before heading off to law school at Florida State University, making him a rare Gator-Seminole hybrid. Lilly has maintained a love of both football and community ever since, as evidenced by his volunteer role as the voice of the Highlanders on Friday nights at Legion Field, taking over the role from long-time game announcer Dick Howell. He also spends time on Highlander Hill calling games for the school varsity baseball and JV games.

The value of role models has long been cited as the reason for the subsequent successful careers of their young protégé. Lilly's experience is evidence. He is board certified by The Florida Bar as a Civil Trial Lawyer, a distinction held by less than two percent of all lawyers within the state of Florida.

"I decided to become a lawyer because of the influence of the lawyers of the Woolfolk and Myers firm as I was growing up," Lilly said recently, citing several individuals who are almost legendary in the history of the area. "Walter Woolfolk, Clint Curtis and Mike Crews were all Sunday School teachers of mine at First Methodist, and Robin Gibson was my Key Club Advisor at Lake Wales High School."

After graduating Kent returned to Polk County and began practicing law with his role models at Woolfolk and Myers. He left that firm with Clint Curtis in 1978 when Curtis started his own practice to specialize in Personal Injury law. Curtis became a Circuit Court judge in the early 1980's, so Lilly joined a professional association called Gibson, Connor & Lilly. The trio operated offices in Lake Wales and Tallahassee for 15 years.

Lilly went on to open his own firm in 1997 with offices in Lakeland and Lake Wales which he maintains today with his current partner, Steven C. Brown of Sebring. Both attorneys are AV Rated lawyers, the highest rating established by Martindale Hubbell, the agency which provides attorneys' ratings throughout the United States.

Kent Lilly and his wife, Cindy have two boys, Justice and Lawton. He is a member of the First United Methodist Church and local civic organizations. He also spends time helping Cindy out with her "Calamity Anne Cattle Company" on Windy Hill, 'where every cow has a name," he added.

Kent told the News that "all my neighbors think I'm nuts out there" while swimming in Crooked Lake every day from April to November "dodging the gators and jet skis." He also loves to spend time "hanging out at the cabin on our island in Lake Pierce" or on their 100-acres farmstead in Webster.

Lilly's career has been spectacularly successful as he won scores of major cases involving personal injury and wrongful death, often winning millions for plaintiffs. Long recognized by his peers, Lilly has also served as president of numerous organizations including the Lake Wales Area Chamber of Commerce and Lakeland Bar Association, the 10th Circuit Judicial Nominating Commission (Co-Chair), and three terms as president of the Polk County Trial Lawyers Association.

Lilly is also Board Certified in Civil Trial Advocacy by the National Board of Trial Advocacy (NBTA), and a member of the Million Dollar Advocates Forum, Florida SuperLawyers and President-elect of The American Board of Trial Advocates (ABOTA), Tampa Bay Chapter. He has received the Professionalism Award from the Willson American Inn of Court, the Jerry DeVane Professionalism Award from the Lakeland Bar Assn and was named the Trial Lawyer of the Year by the Tampa Bay Chapter of ABOTA.