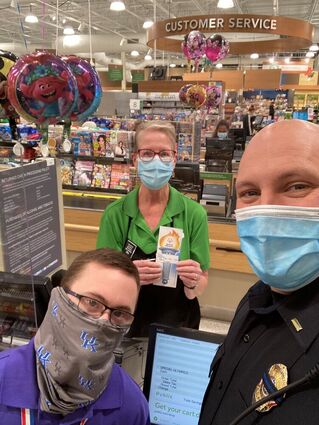 Special Olympian Joseph Lunsford joined Deputy Chief David Black of the Lake Wales Police Department to thank Publix Supermarkets for their support of the Torch Run, an annual fundraiser for the Special Olympics.

Lunsford, 28, has been selected to represent Florida in the 2022 Special Olympics USA to be held in Orlando June 5th-12th, 2022. Lunsford is a multi-sport athlete and has competed in a wide range of Special Olympics sports, including track, softball, basketball, golf and bocce. Bocce will be his challenge at the event.

"As he's gotten older, he's shied away from the contact sports and now enjoys golf and bocce the most," said his father, Mike Lunsford, who with his wife Pam Lunsford has coached Special Olympians for many years. "Joseph is also a pretty good dancer. He's been taking dancing lessons for years at the Hankin School of Dance" in Lake Wales, he said, adding his favorite is Hip-hop.

Earning the position on the Special Olympics Florida team is no small feat, requiring Joseph to prequalify through his winning of a gold medal in bocce after advancing through local, regional and state-wide competition. Local supporters are encouraged to give him a boost.

Joseph will go with the enthusiastic support of the Lake Wales Police Department. He has been a part of the Law Enforcement Torch Run campaign supported by the department for ten years. "The program raises awareness and funds for Special Olympics Florida and our local Special Olympics athletes," said Deputy Chief David Black.

Joseph volunteers at the Lake Wales Care Center, helps at Sweet Ella's Produce, and enjoys rooting for the Tampa Bay Rays and Tampa Bay Lightning, according to Black. He is an avid Andy Griffith Show fan. "Just start a line from one of the show's many episodes and Joseph can finish it," Black added.

Joseph is also supported by a large cheering squad that includes his family and, friends. The crowd cheering him on is sure to include his girlfriend, Hayley Spurgeon, who has herself been chosen to participate in the Florida basketball squad according to Black.

"The hardest thing for many of these kids," Mike added, "is that they have no one there to cheer for them to encourage them. We need volunteers, but that can be as simple as cheering them on, encouraging them to take the next step."

Joseph attended both McLaughlin Middle School and Lake Wales High School, and is excited to represent his town, county, and state on a national stage.

The Beijing 2022 Winter Olympics will run between February 4 and February 20, with the Winter Paralympics following between March 4 and March 13. https://winterolympics.wiki/