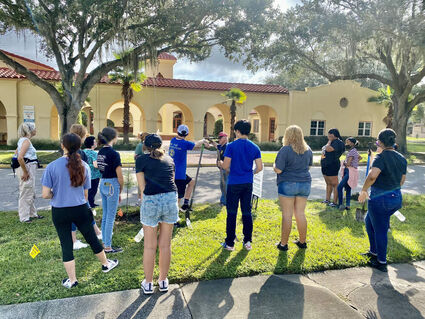 Volunteers listen to instructions from Lake Wales Heritage Director Preston Troutman as they prepare to plant trees Saturday morning. Two dozen turned out to help take the first steps toward an ambitious program to plant more than 1,000 trees to complete the 1930 landscape plan created by Frederick Law Olmsted Jr.

"People don't know much about Olmsted," volunteer Preston Troutman told a group of 15 students from Lake Wales High School. The students, members of the school's Interact Club, had just help complete the first plantings. "He had a plan for all these streets," Troutman told them, explaining several of the signature species that mark many streets around Lake Wales.

The 30 Lemon Bottlebrush trees, a popular red-flowering species, now line the west side of the street south of Central Avenue. They will mature in about ten years and produce displays of red flowers in multiple blooms each year, according to Robert Connors, secretary of Lake Wales Heritage. The trees will grow no more than about 12 to 15 feet tall, which will keep them from interfering with overhead wires on the street. Troutman arranged to provide a 300-gallon water wagon which was used to water the trees as they were planted. He plans to repeat the generous watering every Saturday for at least six weeks. Residents of 4th street are welcome to add their own watering efforts.

"You'll be able to tell your children and grandchildren that you helped here," Heritage Director and Education Committee Chair Nikki Sealey told the young volunteers. Sealey, a teacher at Bok Academy South, has developed plans for a weekend educational program for students and their parents which will include elements of the history and biology of the Olmsted plan, coupled with interpretive walks through the parks and streetscapes he designed here. 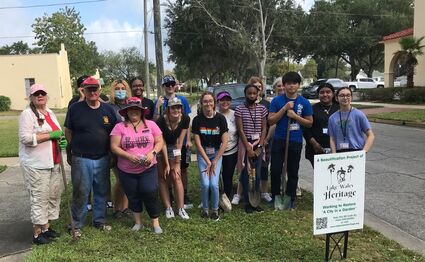 Olmsted's extensive designs for the city are evident in surviving Southern Live oaks that line both Central and Polk Avenue. Other 90-year-old trees still surviving are the Washingtonia palms of Tillman Avenue, Camphor trees on Second Street, a scattering of Canary Island Date palms on Johnson Avenue, and a dozen Magnolia trees along western Lakeshore Boulevard.

"There were more than 40 Magnolia trees on Lakeshore when I was young," Connors told the group, "Today there are about a dozen." Years of neglect, hurricanes, and uniformed decisions decimated the trees, he said.

Lake Wales Heritage was formed in 2017 and has worked to plan and get approvals for the project since that date. The funds used in the plantings and educational efforts have come from memberships and donations. The landmark first plantings should soon be followed by additional trees to be placed on Bullard and Johnson Avenues. Next summer will see more Live oaks and Magnolias set.

"We were really pleased to see these young people come out and take such an interest in their community," said Connors. "They will be able to look back with pride at this moment when they helped set a historic program in motion."