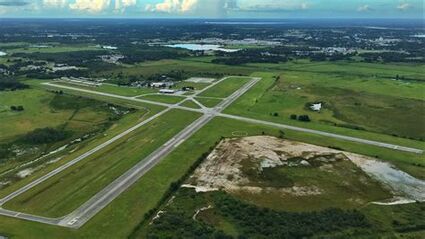 Lake Wales Airport has received several major improvements, not all of which are shown in this photograph.

Thanks to a grant from the Federal Aviation Administration, Lake Wales Airport will soon receive a new east apron. The City Commission awarded the project contract to low-bidder Ajax Paving, which quoted a price of $831,283.20. The FAA will pay 100% of the cost.

The construction project will see a complete reconstruction of the old apron rather than a resurfacing, since an engineering report from the City's consultants, Hoyle Tanner, indicated that the old one was too debilitated to be saved.

The apron is located to the north of and adjacent to runway 6/24. It serves the commercial fueling pumps that sell aviation gas, a major source of revenue for the airport.

The City-owned facility has recently benefitted from other major improvements, including a long-awaited extension of the 6/24 runway. That project also included reinforcing it to support heavier aircraft. Coupled with the longer 5,400-foot length, it can now accept light jets, which require more distance to take off and land due to their higher speeds.

Along with the new runway the airport has also recently received new taxiways on both the primary 6/24 and the secondary, or crosswind runway 17/35. Taxiways are a major safety improvement, allowing aircraft to clear the runway after landing, so providing for a shorter spacing of operations. The taxiways also opened up access for planned new hangars.

The airport is located only a mile from downtown Lake Wales, and very near the intersection of US 27 and SR 60, giving it enormous potential.